When the Homework Hits Home

Sometimes, I scare myself.

With our usual Old Testament professor in the Holy Land, the Academic Dean Melody Knowles was filling in as our lecturer. Her assignment was for us to write a psalm of lament for a community (thus assuring people would write on broader topics).  After much thought and prayer on where to go with this assignment, I decided to write on a topic that has driven much of my recent political action:  the wide availability of guns and the wanton killing of people in various otherwise innocuous settings.

And then, it happened again on Saturday. This time at a synagogue right before morning Shabbat services at Tree of Life synagogue in Pittsburgh's Squirrel Hill neighborhood. Just hearing the names and ages of those killed told a story to me. My wife is Jewish and routinely attends the Saturday morning service at her temple. The congregation is usually some of the stalwarts and most committed members of that Jewish community, the ones who volunteer to lead in any number of ways. Saturday is also the day when major ceremonies such as bar and bat mitzvahs take place. At Tree of Life, a baby and his family would be celebrating the bris, the time of circumcision. And so at this time of happiness, a man armed with an assault rifle and Glock pistols came into the sanctuary, shouted about killing Jews, and proceeded to do so. Eleven died at the scene...others were wounded.

And we are back to another round of a local community in mourning, the communities around that community offering love and support as they mourn, and a nation reeling from its own negligence to address gun violence.

So, with that....hear is the psalm that I wrote and posted for my class on Friday morning:

2 Do you not see the body counts rising,
or hear the mourners’ scream?

3 The tears of fathers and mothers
Soak cheeks and inflame throats.

4 Does this blood cry out to you?
Will these lives cut short touch you?

5 The opponents say not to talk of the horror.
They reprimand us, saying “Too soon!”

6 Answer, Lord! Is it too soon?
or is it too late?
7 Are we left to offer thoughts and prayers
to an empty void?

8 You are the God who hears our prayers
and you know our thoughts both in our hearts and minds.

9 You wipe away the tears from the eyes;
you do not take pleasure in violent deaths.

10 You alone hear the hoarse cries for help.


Lord, come quickly to save us. 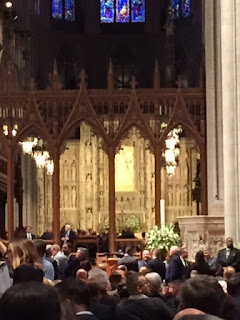 Matthew Shepherd's remains have finally found eternal rest at the Washington National Cathedral, twenty years since a brutal murder in a Wyoming field sent his soul home to God.

I will never forget where I was when I learned the news of the attack on Matthew Shepherd. I was sitting at the traffic light at Magnolia Drive heading east on Apalachee Parkway. I was listening to NPR at the top of the hour and the news anchor announced that there had been a murder in Wyoming. A young man had been brutally killed, tied to a fence to die. His crime deserving of this gruesome death: he was a gay man.

And I wept. Twenty years later, I still weep.

Words cannot adequately capture all the emotions swirling inside me as I came to honor his life and the legacy that rose up out that act of senseless violence. To see Bishop Gene Robinson carrying Shepherd's ashes in the procession had multiple levels of powerful meaning. I found myself brought back in time to 1998. Gene Robinson was still Canon to the Ordinary in New Hampshire. It would be another five years later that he would be elected the ninth bishop of New Hampshire and my otherwise sweet and somewhat mild-mannered Episcopal diocese of my childhood would be attacked from all corners of the Anglican Communion, and +Gene would receive hundreds of death threats and have to put on a bulletproof vest every time he presided. Bishop Gene shared that on the day of his consecration in November, 2003, he received a note of encouragement from Judy Shepherd, the mother of Matthew. A connection was made.

In 1998, I had already gone into exile from the Episcopal Church in Tallahassee. The traditional welcome signs had already disappeared at St. John's in downtown Tallahassee. In their place, an eagle that looked straight out of the Third Reich adored the corners of the church. It was truth-in-advertising: not everyone was welcome and the LGBTQ community most certainly was not. I was covering the Florida legislature where I regularly had to deal with lawmakers who had no problem telling gay teenagers visiting their offices that they were going to Hell, or looking this particular reporter in the eyes and gleefully talking of their latest piece of legislation that would attack the gay community. These were the years when I really should have been able to turn to the church.

Fast-forward to sitting in Washington National Cathedral today and being twenty years beyond that time. And all the things that have happened in between. There are far more people willing to be out and visible as LGBTQ and there are more straight people who are OK with the likes of me. Hard-earned rights such as marriage equality have been won, and lots of Fortune 500 companies were ahead of the government on recognizing the partners of their LGBTQ employees. In the Episcopal Church, there has been a sea change in the number of outwardly-queer clergy in the church, and there have been changes in the canons to live into the words spoken by former Presiding Bishop Edmond Browning: "in our church there will be no outcasts."

But progress doesn't happen without more struggle. I couldn't help but remember that Matthew Shepherd's death would be followed by one of the most deadly mass shootings in the history of the country at an Orlando gay night club on "Latin Night." And as Bishop Robinson mentioned in the sermon, Matthew Shepherd's murder was preceded that year by another grisly hate crime involving the dragging death of a black man, James Byrd, in Texas. Even though Matthew Shepherd felt welcomed and included in his Episcopal Church, not all Episcopal Churches or dioceses are equally welcoming.

I have quoted before the words from Judaism's Pirkei Avot that "it is not our duty to complete the work but neither are we excused from doing it." We owe it to the generations growing up today to break up the boulders of prejudice and hatred that keep blocking our forward progress. Those boulders are becoming larger and more formidable in today's Trump-inspired climate of trash talking and viciousness toward "the other." But that means it's time to switch out the pick ax for the heavy machinery. And we need to be willing to do it. As Bishop Robinson says that begins with the fundamental act of voting.

Matthew Shepherd's remains have now been laid to rest in a safe and public place. It is too bad his life could not be kept safe in public spaces in Wyoming 20 years ago. Let us not allow his death to be an ending but a beginning for some and a recommitment from others to equal justice for all, no matter "whose arms they're wrapped up in."* Today was a beautiful homecoming for the entire Shepherd family. May God continue to stay with them and make Love's presence known.

****
*paraphrase of Randi Driscoll's lyrics, "What Matters" sung as a prelude at the service.