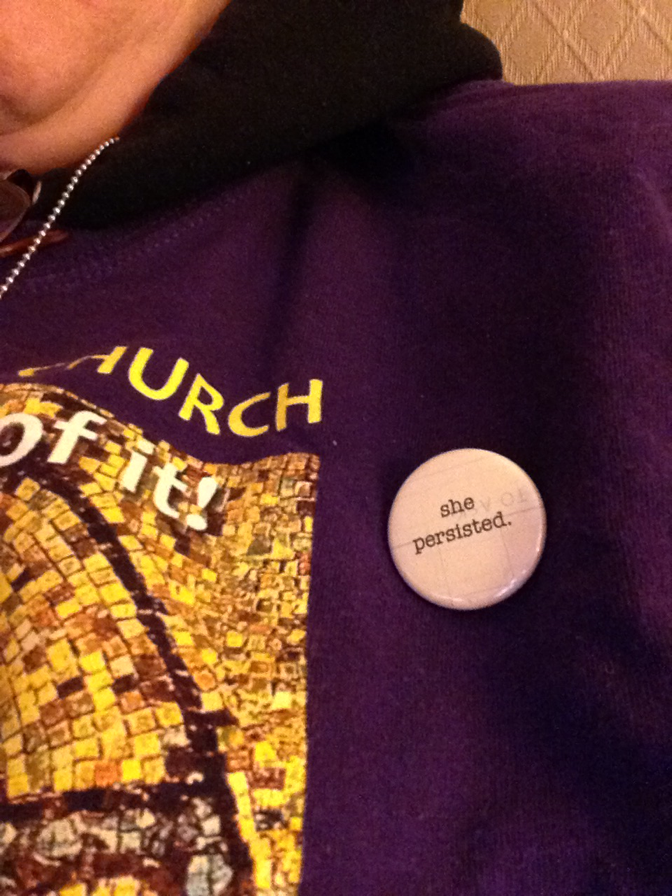 Ask Not What Country You're From

I had the privilege this week of attending a countywide forum called "Created Equal." It was an opportunity to gather with others to look at issues of race and discuss them in table talk sessions, and to hear the stories of those who feel their differences constantly. There was a panel made up of Leon County men and women of different ethnicities and religion. The one representation missing from the panel was a person who is LGBTQ+ identified, but the truth is, when I listen to someone of color and someone of a minority religion, I hear the echoes of my own experience both as a lesbian and as a woman.
There were definitely things I was hearing that touched me at a visceral level because I know what it is to be made to feel unwelcome or suspect. The black man returning from a visit to his native Nigeria described that feeling of being free from "feeling black" when he was in Nigeria and having it shoved in his face when he landed at JFK in New York. I have a similar experience when I travel between my native New Hampshire and where I live now in the south. I don't feel my orientation when I am in the northeast, but here, I can't go a week without being gender misidentified because of my more masculine appearance. I see the looks. I feel the stares from people. And I know the issue is not so much with me: it's the fear inside the other person of me.

One of the "a-ha" moments expressed during the evening was the increasing tribalism in America. And it's that tribalism that is helping to tear us apart. Our diversity of color, religion, ethnicity, orientation, identity is being seen as something that divides us to the point where we can't get along. Our history of Europeans taking the land away from the native indigenous people and enslaving Africans and other minorities to farm and build the country is full of torment and murder and wounds we have ignored. Unlike the "Created Equal" evening, we, of the white majority, haven't really listened and understood the depth of the injury to people. And when those pains have been raised up, the tribal response has been to lock down and see all non-white people as "others" who need to "get over it." Similarly, I have experienced the feeling of my whiteness being the reason to exclude me from a group of predominantly black activists. It hurts, and yet I understand the suspicion.
Unlike this tribal mentality that breaks us up into silos of sameness, I see the cultural diversity of our country as patches of fabric that add to our national quilt. We are different. We have different experiences. We have different languages. But if you're living here, working here, paying your taxes here, then as far as I'm concerned you're from here...the United States of America.
Which brings me to the soundbite of the week from our president.
During a meeting with Republican and Democratic leaders on Thursday to discuss the looming issue of deporting children and young adult immigrants here under the Deferred Action for Childhood Arrivals (DACA), our leader asked why were we trying to keep people from "shithole countries" such as Haiti and the continent of Africa in the United States? This comes after the president's decision to expel El Salvadorans and Haitians still in the country because of the Temporary Protected Status (TPS). Furthermore, he wondered why we didn't accept more people from places such as Norway.
It really doesn't take a whole lot to figure out why the president would prefer people from Norway over Haiti...and it isn't for the lutefisk.
Once again, our president is promoting an image of our country where what will make us "great again" has to do with white supremacy and treating people whose ancestry is not Northern European as "not one of us."
Interestingly, our daily office and Sunday readings have been taken from the Gospel of John. And as I thought about the president's insulting-half-the-world comment, I thought of the evangelist's story of when Philip tells Nathanael about having found the Messiah and his name is Jesus of Nazareth.

Philip found Nathanael and said to him, ‘We have found him about whom Moses in the law and also the prophets wrote, Jesus son of Joseph from Nazareth.’ Nathanael said to him, ‘Can anything good come out of Nazareth?’ Philip said to him, ‘Come and see.’ When Jesus saw Nathanael coming towards him, he said of him, ‘Here is truly an Israelite in whom there is no deceit!’ Nathanael asked him, ‘Where did you come to know me?’ Jesus answered, ‘I saw you under the fig tree before Philip called you.’ Nathanael replied, ‘Rabbi, you are the Son of God! You are the King of Israel!’ Jesus answered, ‘Do you believe because I told you that I saw you under the fig tree? You will see greater things than these.’--John 1:45-50

If this were today...and in our tribal America...I suppose Nathanael could have wondered if anything good could come out of Nazareth because, afterall, it's a shithole.
But then that would be the point.
Nathanael had his own tribe and it definitely didn't include those from Nazareth. And the answer...as it always is in John's Gospel...is that something very good has come out of a place seen as a backwater pit by Nathanael: Jesus. That should tell us today a lot about how we might view people who come from nations that have endured oppressive regimes and natural disasters and famine. Just because a country is impoverished doesn't mean that the people are not just as worthy and capable as people from wealthier nations. The reason most people come here is to seek opportunities or because they are in danger. The immigrants coming here bring with them skills, knowledge, and resiliency that benefit all of us and they become part of that patchwork quilt.
"Jesus" or "God" is within every person, so the answer to Nathanael is "Yes. Good things do come out of Nazareth." Human potential and the ability to contribute to society has nothing to do with skin color or what language you speak or what your spiritual journey looks like. Instead of trying to kick people out, we ought to 'come and see' and discover the benefits of a multicultural society and expand our notion of what it is to be an American. This was the vision Dr. King was laying out there and inviting white America: to experience their tribe could be so much more if they would recognize and respect the dignity of every human being.
Perhaps other nations are looking at us now and asking "Can anything good come out of Nazareth?"