There is just no way to say this nicely: Pope Benedict XVI is trying to cause a rift between Anglicans and Catholics.

In a story in the New York Times, the Pope is creating a home within the Roman Catholic Church for those Anglicans, and presumably Episcopalians, who just can't take it that women are in the priesthood and are becoming bishops... and those freaky gay people are now being allowed into the black shirt with white collar club as well. Eek!!

Don't worry, the Pope is assuring them, you'll get to keep all those things that make you feel all comfy-cozy like some of your prayers and your hymns. But you won't be forced to take communion from one those people. The Pope also is trying to pass this off as simply an effort to make things coherent and easier for Anglicans wishing to convert to Roman Catholicism. But, given that these "conversions" could be whole parishes or dioceses and not just individuals, sorry Benny: I don't buy it.

Meanwhile, the Archbishop of Canterbury, the one who seems to want to be the first Pope of England, apparently hadn't learned of the RC's plans until three weeks ago. And while the ABC doesn't seem particularly concerned or worried about the implications of all this, his emissary to the Vatican it seems was caught off-guard by this papal plan.

Decades of work to heal the wounds of history between Anglicans and Roman Catholics all seem to be falling by the wayside. One wonders if, in the Great Beyond, "Bloody"Mary is blowing a raspberry at Elizabeth I? 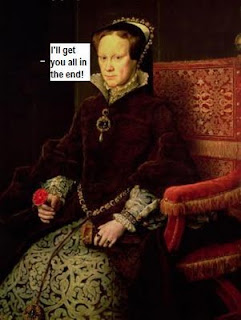 From a Catholic perspective -

Traditional Anglicans have been coming home to the Catholic Church for AWHILE, now, and bringing their parishes with them. Watch EWTN's "Journey Home" on Monday nights (you can watch it online, ewtn.com) - seems like every other week is another Anglican or Anglican priest, telling their story.

So it's not as if the Pope is doing any recruiting, Susan. Don't blame the Catholic Church for Anglican failures to reconcile their differences.

And it's really a low blow to call the Catholic Church "borg like" - Pope Benedict is, after all, only doing what he feels Christ wants - a unified Church. I'm Catholic, and hardly consider myself a borg! ALL Churches have doctrines to them, Susan. That is what distinguishes them from one another.

The Catholic Church, however, states we should love EVERYONE and treat everyone with dignity and respect, regardless of their sexual orientation. I doubt you would find something like that in some fundamentalist (read - "Protestant") churches.

Don't feel special, btw. The Church makes it clear that even us hets are sinners and that we're ALL called to chastity according to our station in life.

You also have to realize - that it's not JUST the Anglicans that this Pope is hoping to unify with. He's been working on reuniting the Eastern Church for a long time now, and making great progress. And talks with the SSPX begin next week; I suspect they will be given canonical status much like returning Anglicans, or perhaps a personal prelature, such as Opus Dei.

What I suspect will happen, indeed what in reality IS happening, is there is a shifting in demographics. You'll have more liberal Catholics moving towards the Episcopal Church, and more of the Traditional elements of the Anglican Church joining the Catholic Church.

I don't see that as a bad thing.

Well, it was hardly a surprise in the sense that English Anglo-Catholics have been working on this since 1992 and were (if you believe William Oddie's "The Roman Option")only denied it by serious objections from most of the English RC heirarchy who weren't keen on getting a load of querelous misogynistic "woofters" to deal with. Der Panzer Kardinal as he then was was quite supportive. Now he has moved to use his authority to bypass the usual channels. So much for Vatican 2 episcopal collegiality!

But I agree with Janet's realignment theory: we'll take your cuddly liberals and you can have our rabid reactionaries! It's a very good deal in my book:-)

Now, now, these are your brothers and sisters in Christ, Fr. John.

The announcement of the creation of a personal ordinariate came from the Vatican's Congregation for the Doctrine of the Faith, in response to literally *hundreds* of Anglicans looking for full communion with the Catholic Church. Traditional Anglican Communion has petitioned the Vatican since 2007 for it.


In truth, there have always been pathways for individuals to come home; this just makes it easier for parishes to come en masse. There are still outrageous amounts of details to work out, but it's not as if the Catholic Church had to fish for Anglicans - they were jumping in the boat.

In fact, there was a joint statement issued by Archbps. Nichols (Catholic) and Williams. So I fail to see how anyone bypassed any ordinary channels, or how it was unexpected. From this statement: "The Apostolic Constitution is further recognition of the substantial overlap in faith, doctrine and spirituality between the Catholic Church and the Anglican tradition. Without the dialogues of the past forty years, this recognition would not have been possible, nor would hopes for full visible unity have been nurtured. In this sense, this Apostolic Constitution is one consequence of ecumenical dialogue between the Catholic Church and the Anglican Communion."

In short - no Susan - the Pope isn't trying to cause a rift between Anglicans and Catholics. He has dedicated his pontificate to one of reunifying the Church - and that is what he is trying to do.

"That they all may be one, as thou, Father, in me, and I in thee; that they also may be one in us; that the world may believe that thou has sent me."

Ahh, so happy Fr. Dougal arrived on the scene before I did!
For the record, I agree with the realignment plan: if this means that all the misogynists and homophobes join the RCC, then good! Part of what is drawing more and more people into Episcopal Churches is the logic of our liturgy, and the reliance on Scripture, reason and tradition that encourages critical thinking, questioning, and seeking God that is lacking or discouraged in some other churches.

Now, Janet: It's always easy to get your facts to support a pro-RC position from Roman Catholic media sources such as EWTN. I've met many ex-Catholics in the Episcopal Church... quite a few of them women who have entered the priesthood because they aren't allowed to follow their calling in their "home" church. And while you take exception to my characterization of the Pope's actions as being like the Borg, even your own descriptions of his mission to "reunite" the Church supports my assertion. There are many of us who swear our spiritual allegiance to God, not a man in Rome, and we'd like to keep it that way.
On the point about ++Rowan Williams: the reports are that the Pope and his representative presented this plan as a fait accompli. And, as one who has read my blog before, you know I see the Archbishop of Canterbury as being about as effective as Neville Chamberlain was during the 1930s. And unlike Roman Catholicism, I know that the ABC is very human, and has no authority over me or the American Church... and that seems to gall him. Please see the labeled section "Anglican Angst".
Finally, while I'm all for allowing those Anglicans who can't stand women and gays to please go their own way, many of your fellow Catholics, especially in heavily RC areas such as Massachusetts, are not thrilled to be receiving the reactionaries from us. Nor do they think it's fair that a married Anglican priest can become a priest with the RCs, and their own priests must pledge celibacy. Hardly seems fair. But then, there's that whole priest shortage... and better to have a married man than a woman.

Certainly the take this side of the water is that Benedict has opened a door for group re-alignment that wasn't there before. Individual submission was the norm. And yes, there has been a seeking of this option that came from the Catholic Anglican side rather than the RC, so it is a response rather than poaching. The bypass of the usual channels is there in as much the announcement came via the CDF, not the Council for Unity and through an announcenment rather than an agreed statement. Our press reports that the ABC had 2 days warning from Cardinal Levada (flew into London Friday, told Rowan Saturday, Press Conference Monday) and Rowan's letter to the English Bishop's said "Sorry I couldn't tell you earlier, but I didn't know". Susan, you are 2nd person who has suggested the Neville Chamberlain analogy for Rowan: but if NC hadn't bought time for the UK to rearm and get its air defence radar in place for 1940 and had gone to arms in 1938 we might not have won the Battle of Britain and I'd be in a concentration camp, rather than blogging. Perhaps Rowan has bought Anglicanism enough time to realign better by fudging for a year or two. With the Catholic conservatives out of the equation we can deal with the Puritans more effectively. They will not get the property because the Charity Commissioners require the C of E to sell assets at market value, not give them away and the claim that they have ceased to be the real Church of England by ordaining women will hold no water because that legislation was enacted by Act of Parliament, not just by Synod. There are advantages to Establishment sometimes!

There are advantages to Establishment sometimes!

Indeed! But then you miss the American fun of never-ending lawsuits as parishes and those couple of rogue dioceses try to lay claim to that which never really belonged to them in the first place.

"you miss the American fun of never ending law suits" Fun yes, but ungodly - it encourages lawyers!(Not that I have anything agin lawyers or their families:-))