In the past week, two discussions with two friends of two different religious traditions brought up the topic of "exposing things hidden." Each of them were dealing with very different things, but I quietly noted that this theme had emerged in our conversations and I carried that into the weekend.
And then...Charlottesville.
I had heard there was going to be something happening with white nationalists rallying because of a vote by city officials in Charlottesville to remove a statue of Confederate Gen. Robert E. Lee. I had also heard that there would be clergy and laypeople assembling to respond in a peaceful counter-demonstration to this hate-fueled rally. I was anxious for them, and prayed that this would play out as it has in the past four decades in America: one group rallies with  about 50 of their super-white friends while many more  gather to sing and pray in defiance of white nationalism. The groups are separated, they disperse, and that's that.
But not this time in Charlottesville.
I grew concerned as I followed a Twitter feed of the Rev. Traci Blackmon, a St. Louis pastor who has been so outspoken against white supremacy since the Michael Brown killing in Ferguson. Initially, there was the prayer vigil gathering in a Charlottesville church. The sanctuary was filled with people of all races. They were there to center in prayer, be reminded of their mission and commission from Christ to stand in peace with Love to protect those who are the targets of white supremacy.
Then the images began appearing on Facebook...videos of young white men dressed in khakis and polo and Oxford shirts marching with tiki torches and chanting slogans of "Blood and Soil" and "You will not replace us!" (which was later reported to be "Jews will not replace us!") The cadence of the chant was reminiscent of a scene from the Nazi propoganda film, "Triumph of the Will" in which a crowd assembled in Nuremberg cheered on Adolph Hitler:
"Ein Volk! Ein Reich! Ein Führer!  Ein Deutschland!"
My body temperature dropped as I watched this on the screen of my iPad. This was no 50 people; there were probably a couple hundred of them...all white, all male, and about the same ages as my nieces and nephew. Then there were the tweets from Rev. Blackmon:

This is Charlottesville...home to my dad's alma mater and law school.
Rev. Blackmon would later post a Facebook video, her voice tense with terror as she and others drove through the street back to their hotel. She hadn't seen Klansmen since she was five years old. And here they were...only they weren't wearing their robes and hoods. They were proudly walking through the streets of Charlottesville with their torches and bats. And they were young men dressed in respectable street clothes.
The tension grew on Saturday. There were clashes between the two groups. And as the counter-demonstrators marched in a street, a car driven by James Fields of Ohio, plowed into some parked cars  that ran into the peaceful assembly of people, killing one woman and injuring 19 others. Two others, helicopter operators with the state police, would also die as a result of this protest by the Nazis. The president, a man who has hired White Nationalists as his advisors, issued a statement in which he "condemned in the strongest way possible" the violence "on all sides." Forgive me for saying this but...bullshit. While some on the counter-demonstration front apparently maced American Nazi leader Richard Spencer as he marched, nobody on their side was killed by a far-left winger slamming a car into them. These are not apples to apples here.
I thought back to my friends and the bringing to light those things which were hidden in darkness. We have always known that there was a racist element in our society. Many of us know that our country was built on the injustice of slavery, the taking of land from the indigenous population, and that there are systems in place to make sure that one group--white Americans--will not suffer the hardships of exclusion of access. But if the many senseless killings of black and brown people without justice being served didn't wake up white America to this fact...if the election of a president who sides with totalitarian regimes and has outspoken white supremacists as his closest aides didn't wake up white America...perhaps this horrific event in Charlottesville might make more of white America see that we have a serious problem...a real enemy...and that enemy is us.
In the Gosepl of Luke, we hear Jesus say these words:
‘No one after lighting a lamp hides it under a jar, or puts it under a bed, but puts it on a lampstand, so that those who enter may see the light. For nothing is hidden that will not be disclosed, nor is anything secret that will not become known and come to light.’(Luke 8:16-17)
I think Charlottesville has exposed and shed light on the evil that is all too-pervasive in America and has been for far too long. We have a cancer of white supremacy and it is being brought out of the shadows and into the light and parades through streets with tiki torches in khakis and Oxford shirts. It tweets generic and lackluster condemnations of itself while blustering and bullying with threats of nuclear war. Especially for those of us who are white and who claim the mantle of Christ, while we personally may not participate in the facism of America, we are not allowed to turn away, plug our ears, and otherwise do nothing to dismantle it. Silence is not an option. Now that we have seen the ugly head of Neo Nazism parading in a southern city, there is no turning away but a call to confront this and bring our own lights to this cause.
Dear white people: it's time to dismantle the white supremacy that has festered below the surface in our society once and for all.
Posted by SCG at 8/13/2017 08:26:00 PM 1 comment:

"It" in this case is my deluge of postcards where I quote passages of Scripture.

Our junior U.S. Senator began daily tweets on his personal Twitter account to let everyone know that he reads the Bible, or at least some portions of the Bible. Presumably, he feels the need to share this with the Twitterverse so that everyone can see how he, as a United States Senator, is being guided by God in all that he does. He is such a good Christian.

Interesting. Funny that he has hung so closely to the Book of Proverbs and considers this evidence of his deep and abiding Christian faith. I would have thought someone wanting to call upon the Lord through social media might seek guidance from "our only mediator and advocate" Jesus Christ. And while Proverbs does contain some wonderfully wise words, I thought the Senator needed to get a little closer to the words of Jesus. So, I started sending him postcards each with a different passage from the Bible. I don't think it's right to limit Scriptural instructions to just 140 characters. 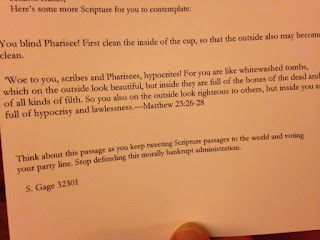 Considering Sen. Rubio's recent actions, his most egregious to date being the many votes he cast in favor of taking away access to health insurance for some of the very poor, elderly, and differently-abled people in America, I figured he needed a little more Jesus and a little less Proverbial wisdom.

Most of the passages I chose were from the Gospel according to Matthew. Matthew 25, naturally, came to mind with the closing verses being Jesus' discourse on "what you do to the least of these you do to me," only I decided the Senator needed to read the parts about those who did NOT take care of the poor, the hungry, the orphan, the widow, and the people in prison. I also reminded him of Matthew 7:15-23 in which we learn to beware of false prophets and those people who say "Lord, Lord" but Jesus never knew them because they failed to bear the type of spiritual fruit that says, "I'm a follower of Christ."  I mixed it up with a parable from the Gospel of Luke, chapter 16, in which we hear the tale of the rich man who ignored Lazarus the beggar at the gate...only to die and find Lazarus was in heaven with Father Abraham while the rich man suffered in the fires of Hades.

I realize the Senator prefers his Old Testament readings, so Psalm 146 seemed appropriate in reminding him of how we are to not put our trust in rulers of the earth because they are going to die and blow away...just like him and his party's ordained and unhinged leader. Each postcard reminded him that the current administration is morally bankrupt and he should stop defending them.

This morning, however, I learned that Sen. Rubio...like Sens. Graham, McConnell, and McCain as well as the president...have all received large sums of money from a Ukrainian billionaire with ties to Russian President Vladimir Putin. So, it may be that Rubio is like one who cannot hear; hence will not listen. Perhaps he needs to read another verse from Proverbs:

The wicked accept a concealed bribe