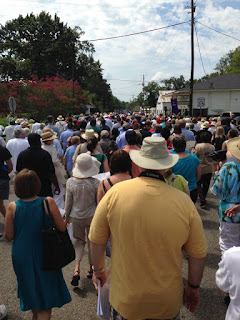 There is no other way to describe the South in the summer but hot. Unrelenting, blazing, baking, humid hot. Climate change has probably added to the misery, but it was probably just as miserably hot in 1965 Alabama as it is in 2015 Alabama. And it was under those hot and sweaty conditions that Jonathan Myrick Daniels and others found themselves arrested and thrown in the Lowndes County jail in Hayneville fifty years ago.

Daniels, a seminarian at Episcopal Theological School (now EDS) and a native of New Hampshire, had responded to Dr. Martin Luther King, Jr.'s plea for people to join in the march at Selma. He and another seminarian, Judy Upham, stayed on in Selma to continue working in the civil rights movement. His crime that put him in jail was picketing businesses in nearby Fort Deposit. They were locked up on August 14th, crammed into cells with occasional running water, toilets that would clog and overflow, and no fans or air-conditioning. Daniels wrote the following letter home to his mother, dated August 17, 1965:

An eminently peculiar birthday card, but....I have been in jail ever since Saturday--the Lowndes county jail in Hayneville, after being transferred from Fort Deposit, where a bunch of us were arrested for picketing. (As a gun toting Cracker said to me when I observed that we had a constitutional right to picket, "You don't have any rights in Fort Deposit.") We are not being bailed out because we are seeking an injunction and trying to get our cases transferred to a federal court. The food is vile and we aren't allowed to bathe (whew!), but otherwise we are okay. Should be out in 2-3 days and back to work. As you can imagine, I'll have a tale or two to swap over our next martini! (This damned pencil is about an inch and a quarter long.) Getting some reading, thinking, discussing, speculating (and sleeping) done--but cussed little else!
The card I bought and the present will have to wait, but I sure will be thinking of you with love and prayers! Have a martini for me and a birthday that is gay in some fun way.

With much, much love,
Jon

Three days later, Jon Daniels would be shot to death on the steps of Varner's Cash Store. The group had been released, and Daniels, a Catholic priest named Richard Morrisroe, and two African-American teenagers, Ruby Sales and Joyce Bailey, walked around the corner to the store with the inviting signs for Coca-cola and Pepsi. They were thirsty. As Daniels opened the screen door for Ruby, Tom Coleman, a special deputy sheriff, ordered them to leave or he'll shoot you "sons of bitches." Daniels pushed Ruby away, and demanded to know if this was a threat, and Coleman shot him at point-blank range in the right side of the chest. The shot was enough to kill Daniels instantly. The others fled, with Coleman shooting Morrisroe in the back, wounds that still haunt him today.

Daniels death still haunts us today. So do the deaths of other civil rights workers, gunned down or beaten to death on the streets of Alabama.

This was the first time I was able to make this trip for the Jonathan Myrick Daniels pilgrimage. This being the 50th anniversary, I knew this was the time I absolutely had to go. And as I stood in the place where this murder happened, I became overwhelmed with how we were making this place of a horrid death into a holy site and that his death has become one in a string of violent deaths involving guns aimed at unarmed people. It was telling to me that as we started a litany of dedication and blessing of the historical marker at that spot, a strong breeze blew to cool the sweat running down our backs. Silently, I made note of this, and thought perhaps this was the Spirit breathing the breath of courage in the face of such rage and fear that still is gripping the world. "In the name of Jonathan, we have come."

They had kneelers in the parking lot where the store had been if we so chose to kneel and pray. I could not bring myself to do that, but stood in the shade across the street. There I prayed, in silence with many tears, as I considered the battle of Love vs. Fear, Love vs. Hate, Love vs. Rage. I realized how quickly I can get sucked into that same place of Fear, Hate, and Rage even as I strive to remain with and in Love. "O God the Father of all whose Son taught us to love our enemies....deliver them and us from cruelty, hatred and revenge so that in your good time we may all stand reconciled before you..." How often have I prayed these words, and how true they are and how important they are to not be just words. I have known this and felt this prayer's power before, but standing there with tears streaming onto my glasses and sweat running down my back, I asked for this thorn to be removed from me in order to fill me up with more Love. I don't think this is a plea to allow me to make friends with oppression or oppressors. Quite the opposite! I need the strength and courage of Love to meet oppression with skills of a martial artist who can take the blow of an opponent and redirect it to the advantage of the artist.

There were many songs that the pilgrims sang as we moved from one place to another to recall Daniels' final days. But I had brought along our collection of Sweet Honey in the Rock for the three-and-a-half hour drive. The one that kept playing through my head as we walked was a freedom song, "No More Auction Block"

We who call ourselves Christian know how to fight with Love because we have been given that example in the life of Jesus, and the life of many who followed Jesus. That includes Jonathan Myrick Daniels. To paraphrase our Presiding-Bishop Elect Michael Curry, "Go!! Keep on Going!" Don't look to the left or the right, just go and be the light, the Love, the Life and that is The Way to affect change and defeat the fear, hatred, cruelty and revenge that is out there.
Posted by SCG at 8/16/2015 01:32:00 AM 1 comment:

Out of the Deep: Reflecting on Racism

I started out this afternoon's gathering of our Education for Ministry group by quoting the opening line of our assigned psalm from this morning:
Out of the deep have I called to you, O Lord; Lord, hear my voice.--Ps.130 v1
I asked them to consider that line, and then pick from three words (thank you, Anne Lamott) to describe the cry they've put up to God the most recently: Wow! Help! Thanks!  There were several "Help!" a couple "Thanks!" and "Wow!" I chose "Wow!" but noted my "Wow!" was both that feeling of witnessing something really extraordinary and wonderful, but also the "Wow!" of being overwhelmed by the enormity of it all. "It," in this case, was the heaviness in my heart as I considered that today was the one year anniversary since the shooting death of Michael Brown in Ferguson, MO. His death has become symbolic of so many of the ills in our American society. And he is just one of the names.
There is Trayvon Martin.
There is Eric Garner.
There is Tamir Rice.
There is John Crawford III.
There is Freddie Gray.
There is Sandra Bland.
There are nine people in Charleston, SC, at a church bible study.
There are, frankly, too many who have died. And while the Charleston nine did not die at the hands of law enforcement (or, in the case of Trayvon Martin, a police officer-wannabe), the fact is that whether we want to believe it or not, race is a factor in all of these deaths. It may not be a conscious thought, but certainly in Charleston, it was. And in the case of many of these others, it would seem foolish not to see how our insistence on racial profiling in this illusive hunt for "safety" has led to any person of color being deemed suspicious until proven to be trustworthy. We can't ignore what our history has been in this nation that we have been OK with systems where people are bought and sold and beaten and raped and underpaid. While not officially called "slavery" any more, we still have the vestiges of those broken times present in our economy today.
When all things on television were blowing up this past year with protestors and police clashing in the streets and firing tear gas at people marching in the streets of Ferguson, many of my African-American friends on Facebook expressed their rage at the situation, and their outrage at the silence of their white friends about what was happening to black people in this country. I would comment sometimes. But strictly speaking for me, I felt it was much more important for me to witness to their rage, and not speak, but listen. Listen deeply to what they were expressing. Pay attention to my internal responses to their words. Recognize and connect to their stories not by attempting to substitute my own experience in place of theirs, but recognizing when I could say, "I know that feeling," or "I've never had that experience, but I can imagine what that must have been like for you." I took part in a couple of actions, one organized by the Dream Defenders, and the other by a local artist. Again, my contribution in these cases was to be a body, albeit a white body, in support. But my primary goal was to listen.
I don't want to sound like a simpleton about this, but I think the key to white America being able to do the task of working on the racism problem in this country is that we have to  be awake to our own prejudices, and then we have to take the time to listen and get to know those who we see as "other" and learn that, by golly, they're not as different from us as we might have thought. Most people of color want the same things for their kids that we whites want for ours: good schools, healthy bodies, and to live longer than their parents. Those are achievable goals if we make that commitment to each other to turn our faces toward each other instead of going into our respective corners and remaining prisoners of suspicion.
Out of the deep I am calling to you, O Lord; Lord, hear the voice of my supplication.
Posted by SCG at 8/10/2015 12:17:00 AM No comments: