On Friday afternoon, I needed out of here.

Introverts need time alone to recharge and be ready to do the next extroverted thing on the agenda. And my off-the-scale introversion has been tested mightily in this new seminary environment. So I looked up the bus and Metro schedule, grabbed my SmarTrip card, and headed into Washington, DC, to the National Portrait Gallery...one of the items on my "to do" list for this time in Alexandria.

And I was blown away.

It wasn't just observing the work of artists who, in some cases, did some very interesting brush strokes to create a person's likeness (the Bill Clinton portrait was a psychedelic experience!). But as I moved along the wall and took in the story of the presidents we have had in this country, I was catching glimpses of just how complicated, messy, unjust, and painful the struggle has been to keep together a country like ours. Truthfully, we invaded a land that was already occupied...not unlike some of stories from the Hebrew Scriptures...and set up camp and pushed others off into a wilderness that we would then claim another century later. And we did this on the backs of others brought here against their will. Some were not so keen on that idea of slavery, and then they met with fierce opposition that disrupted their presidencies. And then there were wars. And economic depressions. And corruption and largess. 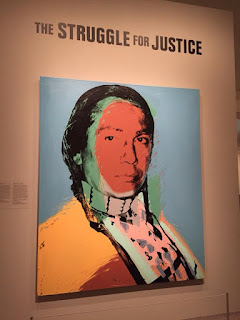 But then there was a video playing in an alcove. It was clips of speeches saved by the History channel. And there were the accomplishments: the ADA. The reunification of East and West Germany. And....marriage equality.

To stop and listen to Barack Obama's speech before a crowd of weeping LGBTQ+ activists and couples holding rainbow flags brought me back instantly to the rush of feelings I experienced both when the noxious Amendment Two passed in Florida...on the same night that Florida helped to elect Barack Obama as our president in 2008...to the incredible sense of a weight lifted from my shoulders when we were able to get our marriage license on January 6, 2015. I wept as I contemplated how even the presidents I did not admire still managed to perform the role of leader...and for more than just their own kind.

As Reagan bellowed, "Mr. Gorbachev: tear down this wall!" another museum visitor looked at me and shook his head.

Once upon a time, we did have presidents of the United States.

There was a line to see the portrait of Barack Obama by Kehinde Wiley. The artwork felt so vibrant and full of life with all the green foliage surrounding the seated Obama looking out at the viewer. But even more than the portrait itself was the excitement of those lining up to have a posed picture with the portrait. All ages and mostly African-Americans wanting to be standing just at his feet...make sure to get my good side poses...young children with their parents looking wide-eyed and in awe of a man who looked more like them than I do.

It was sweet to watch and to listen, and even the Smithsonian worker was grinning as she kept an eye on the line. 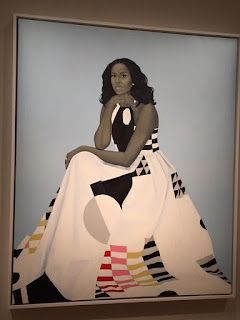 First Lady Michelle Obama's portrait resides on the next floor up and she is in a room with artists' portraits, Broadway and pop music stars, and another Wiley portrait of Notorious B.I.G. There was no line for Mrs. Obama's portrait, and so my moment with this painting felt more private. I examined the ease of her pose, the grace of her dress, and I gave thanks for her strength and composure and her endurance of eight years of public life in the face of some extremely hateful and racist commentary on her and her husband. And I cried once again.

Once upon a time, we did have First Ladies who cared.

The rest of my tour took me past legends of classical and jazz music, sports, and movies. The bust of Chuck Jones, Warner Brothers animator, delighted me. All his characters surrounded him helping to chisel away at his features.

As I left I gave thanks not only for the opportunity to have access to such a treasure of art work, but for the experience of moving through history and realizing that we have faced and been through so much as a people...and we still press on...even when it seemed like an impossible task. And I was reminded of what I remember reading in a Henri Nouwen book that, to put it into my own words, we minister out of our own brokenness and wounded souls. Those wounds, like the wounds inflicted on Jesus' body on the cross, are our place of healing that we bring to the world we encounter.

Thanks be to God for the artists who helped me to have that learning experience.

OK, that's not what they said, but that was my sense at the end of today's first day of orientation at Virginia Theological Seminary.
This has been a very long, strange trip to get to this point. And I had a very long drive with Isabelle, made longer by rainstorms and insane amounts of traffic on I-95, to reflect on where I have been, what I was leaving, and....
What the hell am I doing?!?!?!?
I had a happy life with a cat who had become very attached to me. My spouse and I have been through many ups and downs and twists and turns together for more than 27 years. I have friends, some very close to me. I had a massage practice with wonderful clients and participated in all the antics of the Mickee Faust Club.
And yet....here I am.
It made me think about all those stories in the Gospels about the calling of the various disciples. The way the evangelists tell it, Peter and Andrew and James and John and Matthew and all the others caught sight of Jesus, heard "Follow me," and just dropped their lives and went on their way after this itinerant rabbi who was preaching a radical old idea of love God and love your self and your neighbors with no asterisk or black out dates. I wondered, "Really? Did these guys just so easily and willingly drop their lives to follow Jesus?! Didn't they think this was a bit wild? Did our chroniclers of Jesus' life and miracles clean these stories to avoid the messiness of human attachment and emotion?"
After my own experience, I am convinced that if we wanted to do some midrash on these stories, we'd find that it wasn't so easy for them either. In fact, we get hints of that, dropped here and there in the Gospels, where these followers of Christ express frustration with their decision to leave behind everything. In Matthew's Gospel, right after Jesus informs the rich man that to "be perfect" he needs to sell all of his possessions, give the money to the poor, and follow Jesus, Peter basically says, "We sold everything. We have nothing. What about us?" Later, in that same Gospel, the disciples get testy with each other about who is the greatest apostle of them all. It is the attachment to things, to comforts, that seem to needle at the apostles in ways that I, as one who is going through that process of endings and beginnings, can relate. Even if our evangelists don't outright tell us things, my sense is that the women who followed Jesus and the men who get the credit for being "the twelve" had parts of them that were pained in all of this, and had hoped for something not as a difficult. Even the greatest of saints can get the blues.
With that in mind, I guess I'm in good company. Certainly in the first few days of meeting my new classmates, I can sense that I am not the only one who is experiencing the pain of separating from all that was familiar to embark on something as countercultural as devoting your life to love and serve for the purpose of extending God's Love to a world that isn't fair, isn't just, and can be unbelievably mean.
Will somebody help my cat understand that?