When Will The Angel Save Us From Destruction: a Rosh Hashanah Reflection

Keep On Marching for Mother Earth

In London, and a few hours later in New York, and at several different times throughout the day today, people took to the streets for the People's Climate March.  There is a summit at the United Nations on Tuesday where world leaders will give one day to address a problem that is plaguing us every day: greenhouse gas emissions and the gradual warming of "this fragile Earth our island home." There isn't likely to be any policy made at this summit, but it is designed to renew momentum for real change and adopting strategies to cut the carbon dioxide, methane, and CFCs that are turning this place into a cosmic convection oven. 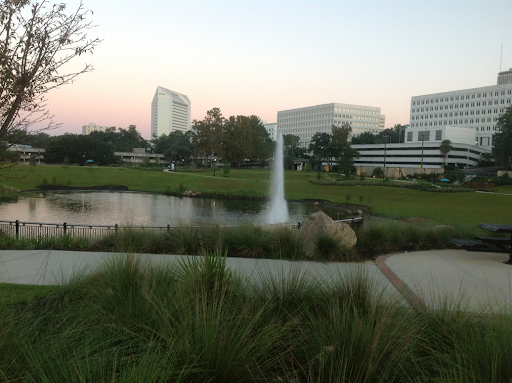 There was no organized demonstration in Tallahassee, so I walked down to Cascades Park to take this picture at sunrise, which was roughly the time people would be stepping off for the march in London.  At this hour of the day, when the rest of the city is sleeping off its FSU football hangover, you can hear the birds and you can get into a rhythm of quiet contemplation... until the train shows up. 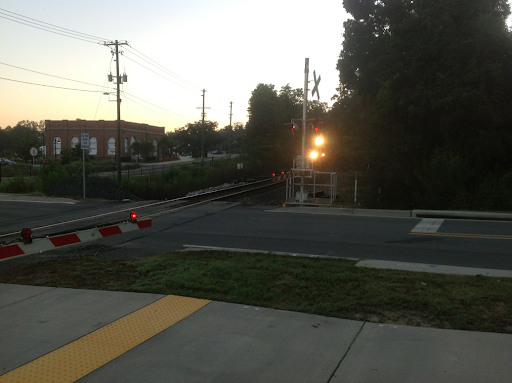 A perfect metaphor, I think, for this whole issue of climate change.  In the balance hangs the beauty of our planet, the water that sustains us, the trees and plants which help to keep us breathing. But all of that is danger of getting run over by our continued greed and the need for more energy which, right now, means more fossil fuels.  And as the train whistle grew louder, drowning out the sounds of nature, it was a reminder that our man-made needs collide with preseving our Earth.
I have heard several people around here express their despair over the situation with climate change.  One of my friends is a scientist who, after asking a few times for a meeting with the Governor of Florida, finally got one... after the Governor's opponent met with him and other scientists first.  The Governor sat quietly through the meeting with the five professors from campuses in the Sunshine State who were impressing upon Governor Rick Scott to take action now to reduce the amount of greenhouse gases being released, and the very real danger that the rise of ocean waters will result in Florida slowly disappearing. Imagine the tourism slogans then: Come to Miami, the New Atlantis!
During the whole meeting, Scott just sat there with a weak grin plastered on his face.  Apparently, the only question he asked was about job creation. Not about solar energy, or beach erosion; job creation.  And this is when I think I can hear the earth sighing beneath the weight of inaction.
I hope that the world leaders took notice of those who were demonstrating, and finally do begin in earnest to address this issue in time for some action to happen in 2015. The planet is counting on it.
Posted by SCG at 9/21/2014 10:38:00 PM No comments:

The Gospel of Jesus and the NFL

Are you ready for some football?
I would say, "Yes," but it seems football wasn't ready for the scrutiny it came under in how it handles players who are out-of-control when they are off-the-field.
This past week, there was the explosion and revulsion over the video from inside the elevator at a hotel where Ray Rice, now formerly of the Baltimore Ravens, decked his then-girlfriend, now wife, Janay, knocking her out cold. Rice was then seen hauling her limp body out of the elevator as if she were a heavy sack of potatoes.  There were reports of at least two other players in the NFL who also beat their significant others. And then the news that Minnesota Vikings star, Adrian Peterson, used a switch to discipline his toddler which left bloody scars on the child.  Ray Rice was fired by the Ravens and indefinitely suspended from the NFL; the other two players were allowed on the field this past Sunday, and Adrian Peterson, while he was benched in Sunday's loss to the Patriots because he was indicted in the child abuse case, will be back on the field this Sunday.
And that's business in the NFL. The Players Association union is appealing Ray Rice's indefinite suspension. My guess is that it will be overturned and he'll be allowed to play for another team.
Meanwhile, Janay Rice was pretty ticked about all the attention and the scrutiny directed at her husband after TMZ released the video from inside the elevator, and ordered everyone to back off.
One man did not back off. Sportscaster James Brown of CBS took last Thursday's opening game between the Ravens and the Steelers as a "moment of personal privilege" to raise the bar for men in America:
James Brown's commentary before the Ravens vs. Steelers game
I appreciate Brown's remarks, especially in light of the teaching of Jesus in last Sunday's Gospel about forgiveness coming on the heals of the equally difficult teaching about making peace with the person who has wronged you in some way from the week before.
In Sunday's Gospel, Jesus is asked how often one must forgive someone who has done wrong. Is it seven times? No, Jesus says. More like seventy-seven times... or as the text might have actually read: 7x7.  The point is that seven, in the Scriptures, is a number of perfection and so your willingness to forgive must be absolute perfection just in the same way that God's forgiveness of us is absolute perfection. The week before, we heard that if you are in a bitter disagreement with another person, go to that person and have a discussion and strive to work things out.  A one-to-one conversation has to be the first step before something between two people becomes a public matter.
How does that fit with what is happening with Ray Rice et. al in the NFL? One could say that Janay is correct: we, the public, have no place in the matters that are between them, and she doesn't want our presence. I can respect that she is feeling exposed to a harsh light because she and her husband are in a harsher light called, "the public eye." And that's the fact. When someone who is a public figure does something criminal, then that public figure can expect that he or she is going to suffer a more intense scrutiny than someone totally unknown to a wider audience.  Is it fair? Probably not. But it is reality. And when someone of the stature of Ray Rice or any other football player knocks the daylights out of his companion, especially female companion, we have moved from that stage of this being just between folks to being between the folks, the team and the public. When somebody famous commits that act of violence that goes viral because the video got posted to social media... then those who were previously willing to look the other way can't' do so without causing more of a furor. His two-game suspension, if it hadn't already felt appallingly trivial, now was unacceptable. Must it hang around his neck forever?  No, not if he goes to counseling and begins getting to the root of why he thinks it's OK to knock out his now-wife. And his wife also needs counseling, clearly. In one of the defenses of Ray Rice's behavior, some people noted, "She hit him first!" And she should not have hit him. Why does she think that's the appropriate way to deal with her emotions? And if she accepts that Ray Rice is within his right to hit her, she's got some issues to work through with a therapist.
Forgiveness of these misdeeds by the NFL, the individual players and others, is always there. But the first move must also be made to acknowledge that a trust has been broken, and a criminal act committed. And there needs to be a rethinking of one's ways. Perhaps this public embarrassment will lead to true repentence and amendment of life for the NFL... and all its associated players.  And perhaps this will bring to light the need for us in this society to rethink our willingness to look away when it comes to domestic violence.
Posted by SCG at 9/17/2014 12:40:00 AM 1 comment: 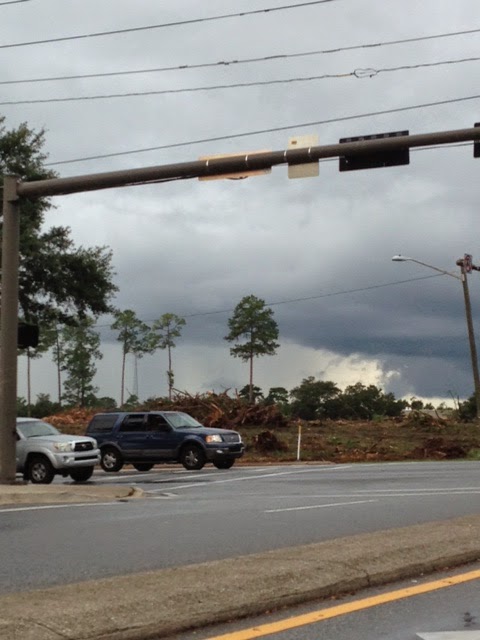 Give us all a reverence for the Earth as your own creation, that we may use its resources rightly in the service of others and to your honor and glory.--Prayers of the People, Form IV, BCP, p.388.

When I first flew into Tallahassee back in the summer of 1990 for my job interview, I struggled to see the city from the sky. There were some lights peeking up through the darkness, but I really couldn't see a city. The next morning, it would become clear to me why I couldn't see Tallahassee from the air at night. It was a green city, packed with parks and trees, trees, and more trees.  I had never seen anything like this before in a state capital.  Concord, NH, is tiny compared to most capitals.  But it is well lit.  And it has concrete.  Same with Jefferson City, MO. And Boston is full of history... and lots of bricks. So, as capitals go, Tallahassee with its canopy roads and towering wooded areas was truly one of a kind.

Which is why the massive clear cutting of a pine forest at the busy intersection of East Park Avenue and Magnolia Drive was so devastating to behold. I was shocked, saddened and depressed to see large piles of what had been stately pines piled up to be hauled off to a lumber yard. And to what end?  The property owners apparently got five million dollars for the sale of this property. The public will now get another strip mall, remarkably called "Magnolia Grove," to go with the Walgreen's, McDonald's and Buffalo wings place. Gee, thanks.

Some have said it was inevitable.  We are growing after all. And this property is near lots of shopping areas and businesses. Why should we be surprised, then, that it has been torn up to be paved and built up just like so many other parts of the city?

Because this is Tallahassee.  It isn't Miami or Jacksonville.  Like me, lots of other people moved here in part because the city had so many green spaces.  But these days, there seems to be an eagerness to tear it up to erect a brand new Whatever shopping center.  Meanwhile, there are countless shopping plazas all over Tallahassee that stand dormant, waiting for someone to love them back to life with a grocery store or a retail outlet of some kind. Why are we not making use of these vacant buildings and pre-paved lots? Why are we insisting on ruining the very thing that makes us different from other cities?

Whenever I pray the words from the Book of Common Prayer that opened this post, I have an image of something in the earth and our environment that I feel needs the prayer. I've visualized the Gulf of Mexico, the sea creatures poisoned by various spills and accidents, even our modest compost heap. Now, I will be visualizing what had once been a lush forest of pine trees at the corner of East Park and Magnolia. Don't be surprised if I cry a little.