Holy Innocents and These Unholy Times 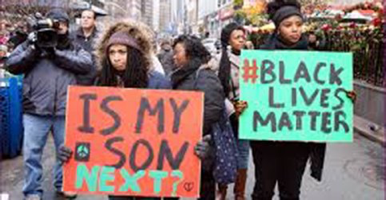 All day yesterday I was battling extreme exhaustion and a dull headache. I was fighting to keep my eyes open as the nightly news came on the television. And when I heard the lead story--that a jury failed to find police officer Timothy Loehmann guilty in the shooting death last year of 12-year-old Tamir Rice--I figured I might as well just close my eyes. I couldn't even cry. I couldn't do more than close my eyes and through the pain in my skull ask again, "Why? How?"
There are, I am sure, lots of excuses for why a cop would pull up to a 12 year-old on a playground and within seconds open fire on the child. I am sure that all the miscommunication about "the suspect" could seem to serve as a reasonable cause for why this happened. But, for me, I was left with the continued doubt that there could be any really good reason things had to go down as they did there in Cleveland. And a mother is still left without the opportunity to see her son grow into a man.
One of my friends posted a statement from an African-American woman who is an academic. In this woman's FB status she laid out the reason why she refused to write yet-another column about the racism of our country, the systems that constantly fail African-Americans, and explaining black outrage to a white audience. I totally understood where this woman was coming from in her anger and disgust with journalism on the topic du jour. It is one of the failings of our media that minorities are expected to talk about "minority stuff" and explain it to the majority in ways that will be palatable. This woman didn't need to write a column; she needed to express the rage she was feeling in her FB status posting. If we, the white public, need this explained again, then it means we really are a sad and sorry lot, and so simpleminded that we might want to enroll in a remedial empathy class.
We don't need this information broken down. We need to get real about breaking down the prejudice and the fear of people of color that leads to the needless and wanton killing of black male children.
Having this verdict come on the eve of the day when the church marks the slaughter of the Holy Innocents by King Herod was sadly too timely. The tale of Herod's wholesale killing of male children because he feared a challenge to his place by the newborn king of Bethlehem may not line up one-for- one with what happened to Tamir Rice. But it is still fear, I believe, that is at the root of why police officers shoot first, and ask questions later. There is the real issue for cops that with so many guns in the hands of so many citizens in this country, they can't always tell who has a toy and who has a weapon. Tamir's toy gun that he was playing with didn't have any features that would distinguish it from a regular gun. That said, police officers Loehmann and his partner Frank Garmback arrived on the scene and appeared to have exited their patrol car and immediately shot Tamir.
Why?
Because the dispatch told them there was a "black male" waving a gun? Tamir didn't look like an adult. He wasn't given a chance to show he didn't have a real gun. Like King Herod's soldiers killing any boy three years or younger, these officers just knew that black+male+gun=shoot. Can we really blame black parents who express outrage and fear that their children can be killed so quickly? Would these officers shoot a white kid in the same situation?
We know Tamir's name. We know Laquan McDonald's name. But there are hundreds more throughout the country, and especially in the city of Chicago, who are getting gunned down. They are our Holy Innocents of this day and age. I'm afraid it won't stop until mothers of white boys become as enraged and are asked to write the 1200-word columns for the newspaper about why this system is broken. And so, for Tamir and all others, I pray...
We remember today, O God, the slaughter of the holy innocents of Bethlehem by King Herod. Receive, we pray, into the arms of your mercy all innocent victims; and by your great might frustrate the designs of evil tyrants and establish your rule of justice, love, and peace; through Jesus Christ our Lord, who lives and reigns with you and the Holy Spirit, one God, for ever and ever.
Posted by SCG at 12/29/2015 11:22:00 PM No comments:

Away From the Manger

The other day I was in a conversation with a colleague about the upcoming Christmas season. It was the usual small talk that one makes at this time of year centering on the topic of whether we're "ready for Christmas." That question for me now always raises a series of other questions about what that really means to be "ready for Christmas." Then she said something that made me think even more:
"We're a long way from the manger," she sighed. A long way from that placid scene in First Century Palestine with the newborn baby and his doting parents and the animals in the stable, remembered in the 21st century with the words of Silent Night: " All is calm. All is bright...Sleep in heavenly peace. Sleep heavenly peace."
At first blush, I could certainly see what she was saying. Our world, in which most of the United States is about to see record high temperatures that are more reminiscent of Austrailia in December, seems to be filled with more rage, more anxiety, and more acts of senseless violence. Many people seem to be operating on a shorter and shorter fuse. Certainly, my patience has been wearing thin with drivers in Tallahassee this week between the ones who like to roll through stop signs and the others who seem to want to take their own sweet time while traveling in the left lane. Every time I could feel my blood pressure rising, I'd be reminded that losing my cool wasn't going to make them go faster or get me anywhere safely. The mere mention of presidential politics makes me roll my eyes. And the deepening divisions between people and the edginess of all conversations involving race, religion, gender, sexual orientation or a combination of any of those definitely can lead to a despairing sigh, "We're a long way from the manger."
But then I'm not that sure that we're all that far away from the manger. Because, despite the song and the soft-glow sepia recollection of what that night was like at the time of Jesus' birth, what that night was probably really like was not that different--in world terms--than our present night, save for the advancements that have led to electricity and cell phones. On that night, a young Hebrew girl and her much older husband were on their way to be present and accounted for by the Emperor.  This was a long trek for the pregnant Mary, and yet this was the type of oppression she and her people endured in this Roman Empire. And it seems Joseph and Mary must have gotten a late start as they could only be put up in the stable. And here--amidst the animals--Mary must give birth. Something tells me that her soul did magnify the Lord--and then some-- quite loudly as she pushed that baby through her birth canal! And, according to our Scriptural accounts, that birth caused a celebration to break out in heaven with lots of "Hallelujah!" Perhaps it wasn't all that calm after all.  And certainly the difficulties of those times, while with less technological enhancements, were no less fear-producing. Roman rulers were tolerant of the Jews as long as they didn't get too uppity. But the Jews were powerless against the Roman juggernaut, leaving many anxious, possibly even full of rage. Various rebellions against the authority had been tried and they failed. This was a time when lepers were segregated away from their communities. Women and children had no standing and there were instances of a breakdown in the social safety net that left some who were to be cared for, begging for help on the streets. Sound familiar?
Here's the thing about that manger and the birth that took place one night so many centuries ago. It was God's amazing effort to make Love so real to us that we could see it in the face of a baby boy. And that act of amazing grace by God is powerful enough, meaningful enough, and ultimately real enough for us that we and others throughout the globe come together on this one night to recall that moment of his birth. That moment lives on in the birth of many other babies, as my spouse noted. It also can be seen in the eyes of any person or creature we stop long enough to step off our own path and our own desire to get somewhere or get something done, and take the time for another. Those things still do happen even if they don't make headlines in the New York Times or even the Thomasville Times-Enterprise.
The manger is at hand. What makes it more than just a sweet story is when we open our hearts to the reality of what it means to have God that up-close and present in our lives. A baby left unattended will die. So we better take care of him, perhaps by loving one another just a little bit more.
Posted by SCG at 12/23/2015 10:39:00 PM No comments:

O God, make speed to save us
O Lord, make haste to help us.

I feel as though this is my daily prayer this Advent. During these days of lighting candles and waiting with patience and expectation the commemoration of the birth of Christ, we are faced with daily reports of gun violence, Islamaphobia, and too much attention to "The Donald" and his angry-filled rants about building walls and kicking Muslims out of the country. Mass shootings lead to mass gun sales. Billboards in California and North Carolina depict Santa with an AR-15.

Is this the reason for the season?

Oddly, it is a common backdrop for the upcoming Christmas. Because if we pay attention to what the Scripture talks about, Jesus was born into a tumultuous time. The Jews were under the thumb of the Roman Empire. Prejudice was rampant then, too. The people knew war... a lot. In many respects, it would seem that Jesus' birth occurred during "the worst of times" in the First Century of the world. So, yes: even as we sing about the little town in Bethlehem and its sweet lullaby-like music sounds discordant against a backdrop of violence and hatred, it is important to have this tune, and all the others that speak to peace on earth and good will toward all people to be on a permanent play in our heads and hearts.

For me, the commitment must be there to live into the ethic that Christ taught to love one another. This is the penicillin of peace against "The Donald" and all others who seek to divide this nation even further. To enter into his realm of hatred will only generate more hatred. This world cannot stand any more of that.