The tumult of last week seems to have carried over into this week. Globally, we have had another horrible attack in Nice, France on Bastille Day, with an angry man plowing a big rig truck through a crowded street. And there was an attempted coup in Turkey which also killed more than 200 people. And in this country, one of the two major political parties has released a platform that is fitting of the Taliban in Afghanistan with its stridently anti-LGBTQ+ positions and opposition to women's reproductive rights. As a former member of the Republican Party, I don't even recognize what part of the "Party of Lincoln" this remnant claims to be. I'm only happy my parents did not live to see this. It would have devastated them. 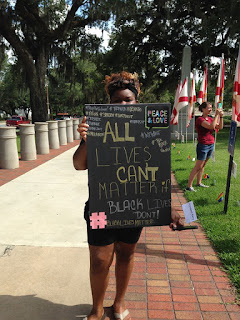 Closer to home, I have been engaged in a process of doing what I call "praying with my feet." I have laced up my sneakers and taken to the street marching with students on Tuesday night from the Florida State campus to the state Capitol. On Wednesday, I met another set of marchers, this time from the FAMU campus, who also converged on the Capitol to call out the names of the 559 black lives ended in altercations with the police in the United States. They also printed their names onto cards attached to plastic picks which we stuck in the ground around the memorial to the victims of the massacre at Pulse nightclub in Orlando. I have watched interviews and reports looking at the intersection of race and the police, listening to police officials who struggle with being both black and blue, who know that there are problems and yet their uniform becomes an obstacle. And there is their legitimate fear that, in America, everybody seems to not only have one gun, but many guns. What a world. What a world.

As hard, and as difficult, and as sobering as all of this has been, it has given me a chance to open my heart a little further. As I raised in an earlier post about Pulse, the true test of one's Christianity is the ability to enter into the woundedness and pain of the other and be truly present for that person. By walking, sitting, crying, chanting, linking arms, and hugging people at these demonstrations, it has been a way for me to listen with my ears and my body and be present with my black, brown, and white brothers and sisters in their place of feeling wounded by the world. I am, and have been, wounded by the world, too. And so I march. I hold hands. I show love.

And I read the Gospel! And the Gospel lesson assigned for this Sunday morning is from Luke where Jesus shows up at Martha and Mary's house. Martha invites him in and goes about doing all the things one does to welcome a guest into a Jewish home. Mary takes a seat at Jesus' feet to learn from him. Martha at some point gets irritated and asks Jesus to get her sister up off the floor and helping her. Instead, Jesus notes that Martha is distracted by many things but Mary is focused on one thing; hence Mary has chosen the better part.

Now, unbeknownst to me, this passage apparently has been used to show that study is good and a "manly" thing while housekeeping is lowly "women's work" and not as important. It's also apparently been used as a way of dividing women from each other (professional women vs. housekeepers, I guess?) I've never read the story that way, and I can't say I would approach this slice of Jesus' life and teachings with that in mind. Rather I can see some things here that relate to what we are seeing in the world, and the importance right now for us to look at what's happening to our sisters and brothers of color in America.

Nowhere in this Gospel lesson does Jesus say, "Martha, you aren't as valuable to me as Mary." Instead, what he notes is how Martha is "distracted by many 'things.'" And he's not just talking about the 'things' of being the perfect Jewish hostess with the mostess. Jesus' message transcends the immediate scene way, way, way back then in the First Century and hits us between the eyes today in the United States. See, we've allowed many 'things' to keep us distracted from THE thing: Love God with all your heart, with all your mind, with all your soul, and with all your strength and love your neighbor as yourself. Because we have allowed for the wound inflicted with the initial institution of slavery to go untreated, and have ignored how we have not kept promises to various populations that we have displaced or uprooted or deserted by white flight to suburbs, we have fallen short of fulfilling that commandment, and kept ourselves otherwise occupied. We have not heard the complaints of our neighbors that they aren't treated with the same respect and dignity as those of us who are white. Worse, we have heard their complaints, and we have chosen not to act. Perhaps, then, it's time to start going back to choosing the better part and living into those promises of our baptismal covenant "to strive for justice and peace among all people and respect the dignity of every human being."

And, as was pointed out in a sermon I heard last Sunday, that work must begin with an examination of our own heart, our own mind, our own soul, and of our own strength. If each of us made the commitment to become radicalized for Love, and choose the better part, we may be able to have a butterfly effect in our own families, and communities. With enough of us doing this, it could truly change the world. Here's the thing about Love: it is stronger than fear, more powerful than hate, will burn longer than rage, and will win in the end. ‪#‎BlackLivesMatter ‬has called for accountability and justice and an end to the brutality. That's not hate speech; that's Love talking. And it's a conversation we are all invited to join. 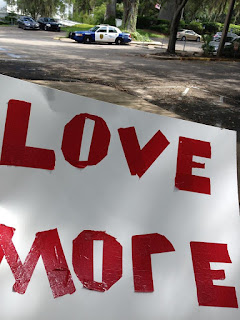 "Do This, And You Will Live"


It has happened. Again. And again.

In two days, in two cities, two very different men with a single common denominator that they were black. Both were shot down by police officers.

One man in Baton Rouge...his name is Alton Sterling...was called in by someone for selling CDs outside a convenience store and having a gun. Two officers responded, and with Sterling pinned to the ground, they shot him in the chest and the back. That was horrifying.

Then, not even a full 24-hours later, in Falcon Heights, Minnesota, another man...his name is Philando Castile...was pulled over for a busted tail light on his car. And with his girlfriend and four-year-old child in the car, an officer shot him and he bled out while his girlfriend recorded the whole incident for Facebook to see. That was sickening.

The media was quick to tell us how Sterling had had his share of run-ins with law enforcement before. Castile, on the other hand, had no rap sheet. He taught in the St. Paul School District. He was a loved teacher and colleague. He was also a black man with a gun, and he told the officer that he had his concealed weapon on his person. He was attempting to get out his wallet from his back pocket when the officer unloaded four bullets into him.

They're dead. The cops are on paid administrative leave. And I have a terrible feeling that, like with the many cases before this, nothing will happen to the officers involved because there will be some justification for why they felt they needed to use deadly force when they weren't being threatened with imminent harm.

Of course, some want to deflect these horrific crimes by reminding us all that not every person serving on a police force is a bad person. Yes, that is true. But I'm not really in the mood to hear about that right now. And even this police officer, Nakia Jones,says it's time for cops to call out and cull the bad apples in their bunch.

Please note: I'm saying the police need to be willing to police themselves. This is not a call to arms to take out cops with more deaths by guns (and please don't even get me started on America's gun addiction!). Even as I have been typing this blog, three four five officers are dead in Dallas at a march against this police brutality. More violence is not surprising given the track record of little to no accountability for the police who have killed black men. But shooting cops only escalates the hate. And the fear. And the mistrust. Enough!

Seriously: is it any wonder that African-Americans in this country are angry and lack confidence in the police or any of our institutions which consistently fail them? Is it any wonder that they express hostility at the idea that they are even "Americans" when their loved ones are gunned down by those who take oaths to protect and serve their communities? Their outrage is understandable and one that I hear and join. I may not have black skin, but that doesn't mean that I can't see this injustice and know that it is a failure which white Americans must acknowledge as our own. If black lives don't matter, then nobody's life matters. And, again, killing the police doesn't make black lives matter, either.

The gospel lesson assigned in this morning's daily office was prophetic:

‘Then they will hand you over to be tortured and will put you to death, and you will be hated by all nations because of my name. Then many will fall away,and they will betray one another and hate one another.And many false prophets will arise and lead many astray. And because of the increase of lawlessness, the love of many will grow cold.But anyone who endures to the end will be saved. And this good news of the kingdom will be proclaimed throughout the world, as a testimony to all the nations; and then the end will come.--Matthew 24: 9-14 (emphasis added).

Will we see an end to this lawlessness in our land? Can we acknowledge the racism that infects so many parts of our culture that makes my white life more valuable than that of my black and brown brothers and sisters? I know this is a monumental undertaking, but we must not shy away from it. We have to hold police officers accountable when they abuse power. Same with our political leaders. Same with our courts, our hospitals, our schools, our religious institutions. That might be the beginning of finally living into God's dream instead of wallowing in the nightmare we create.

And so, with that, I leave on this variation of the children's bedtime prayer:


Now I lay me down to sleep
In hopes I wake and not to weep
To learn of killings overnight
because a cop acted in fright.
God bless...
Alton and Philando, too
And all the victims, black and blue...
This my prayer I raise to you
Be our guide that leads to truth. 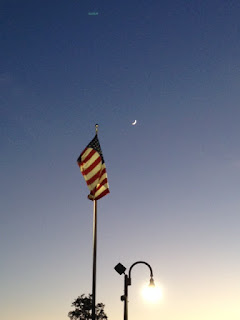