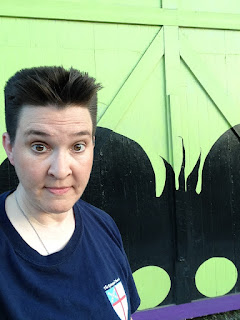 It was the end of a rehearsal one night at the Mickee Faust Clubhouse, and I was gathering up my scripts into a folder. We’d just finished prepping a musical number for our tenth annual “Queer As Faust” cabaret, a song poking fun at the president and his gay supporters in the Log Cabin Republican group. One of my fellow cast members wanted to know how I “do this” (meaning Faust) while being a Christian.

This was not the first time I have been asked this question. I had something of the reverse put to me years ago when I arrived at St. John’s Episcopal Church in my leather biker jacket. A member and fellow Eucharistic Minister said to me, “You can’t come in dressed like that. This isn’t Mickee Faust!” (I should note, he was smiling and clearly ribbing me.) But his joke was likely a serious matter for others.

How can I be in Faust and be an active Christian?

I doubt anyone would call the Mickee Faust Club a “holy place.” It is very rooted in the secular world with a mythology built on the quest for world media domination by a giant rat who smokes a cigar, cracks bad jokes, and is the unloved twin of another much more famous Florida rodent with a Magic Kingdom in Orlando. The woman under the rubber rat ears is an avowed atheist as are many of the company members. Some were raised in households where church attendance was mandatory or were put through a parochial school where education came with a heavy dose of Roman Catholicism or Southern Baptist Convention. Many of us identify as part of the LGBTQ+ community and as such have experienced the cruelty of Christians coming to our events and railing against us while waving the Bible in the air. Such experiences tend to color one’s opinion of Christianity and not in a good way. And when Christianity asserts that its name sake is God in human form…well, it then makes God a culprit in the nastiness of God’s followers.

But then look at Jesus and the people and places where he primarily moved and lived and had his being. Yes, he taught in the Temple, and people were astounded and amazed at his teachings. Yes, he would have dinner with Pharisees (probably because he was of that set). But much of the time, Jesus was hanging out with all those people who were “those people.” He was close to women and men who had no power to speak of, who were the discarded, ignored, or abandoned of his society. He didn’t assert himself with hellfire and brimstone; his power was in his presence and his willingness to enter the experience of these “others.”

Why do you suppose Jesus preferred to be in these settings? Some might say it’s because “these people” needed to be saved. That would be the popular approach to these stories. But I think another way to see this could be that Jesus was searching for those who were the most fertile ground for achieving His ultimate goal: bringing God and humanity together. If Jesus’ mission was to meet people where they were and not where they ought to be, and if his mission was to go in search of the lost and those who had been pushed away, then he’s going to be seen in some places that his society might have deemed “impure.”

Which brings me back to Faust and being a Christian and that whole notion that if I’m a Christian, how can I possibly be part of Faust? I’d say because Jesus expects to be part of the mix of perfect imperfection of our lives so that the mission of Love and reconciliation continues through us. God doesn’t just love that part of me that can recite prayers, or kneel at the altar. God works through me whether I’m at Faust or offering healing touch to someone on my massage table.

God isn’t contained in things and buildings. The spirit of God lives and moves within us and the way we treat one another and live into that new commandment to love and seek out each other. That can happen at Faust and at Church. 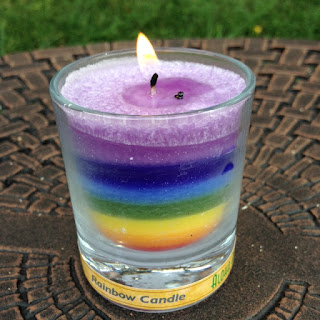 The bells of St. John's Episcopal Church solemnly tolled 49 times at noon today, the one year anniversary of the deadly hate crime committed against the black and Latinx LGBTQ+ community in Orlando's Pulse nightclub. Each echoing ring a remembrance of one of the people killed that night by a twisted and angry individual armed with an assault rifle. The attack shocked all of us who identify as LGBTQ+ because clubs such as Pulse have traditionally been the places that have harbored us, especially when we are young and just beginning to understand our orientation and identity.

I lit a rainbow candle and then sat quietly on a bench in the church's columbarium, closing my eyes to pray as the bells sounded. I couldn't remember all the names of the dead, but I could remember their faces. Most were so young, not even yet 30 years old. And there was the one name and face I could remember: Brenda Lee Marquez McCool, a mother of eleven children and a two-time breast cancer survivor who had gone out to the Latin Night at Pulse with her gay son. They were there to celebrate Orlando's Pride Week. When the gunman began his shooting spree, Brenda reportedly told her son to get down, and put her body in the way of the bullets. I began to sob, my tears co-mingling with the misty rain. 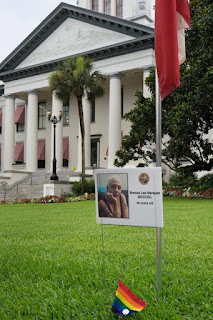 How much more death?
How much more grief?
How little progress have we made since that horrible night?
How? How? How?

Even since Pulse, there still have been violent shooting incidents in this country. None with same body count, but every incident--in Illinois, Texas, California, New York, Alabama--all of those killed had a family that is left to bury their dead and grieve that loss.

There was no will power to address the issue during the Obama administration. And now, we have the NRA's poster child in the White House, and federal lawmakers are actually proposing legislation to relax some of the restrictions on guns. Even Florida Congressman Neal Dunn (R-D2) has signed on to a bill to make it easier to purchase silencers. In our state legislature, there were twice as many pro-gun laws proposed to the ones that were gun control measures. Thankfully, a couple of Republican lawmakers from South Florida complained of "gun fatigue" which resulted in many of the bills dying quietly in committee.

But for Florida to have done nothing to address gun violence after Pulse is...well...repulsive. If any state should be taking the lead on limiting people's access to these weapons of warfare such as the one used at Pulse it should be Florida. I'm losing patience with politicians who want to offer their remembrances of this tragic day.  I would rather they use the power given to them by the voters to do something constructive to stem the violence. No citizen needs to own an AR-15 or any other multiple-shooting device. There is also technology in the works that will make it harder for someone other than the actual owner of a weapon to fire it. These types of technological developments deserve funding and support.

As the bells finished tolling, and I wiped away my tears, I felt a sense of peace come over me. I prayed the Lord's Prayer with special emphasis...

Our Father who art in heaven
hallowed be thy name.
Thy kingdom come
thy will be done
on earth as it is in heaven.
Give us this day our daily bread
and forgive us our trespasses
as we forgive those who trespass against us.
And lead us not into temptation but deliver us from evil.
For thine is the kingdom and the power and the glory forever and ever. Amen.