Meeting Jesus in the Parking Lot 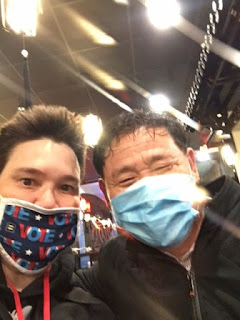 It was a cold and icy night (really...it was!) in Alexandria. I had just driven up the street from the seminary to pick up a wonderful meal prepared with love by an Afghani refugee. It was not just dinner for me: she had prepared meals for others in the dorms who are left to fend for themselves on Saturday night.
As I climbed out of my car, I heard a shout. It was a man walking into the parking lot toward me. At first, I thought it might be one of my fellow seminarians. But as he came closer, I saw he was a middle-aged Chinese man. He was motioning with his hands and pointing to his head and ears. I couldn't tell if he was deaf or what was going on, and the COVID protocols of mask-wearing wasn't making things any easier. He opened his phone and showed me an address: 3221 Duke Street, Alexandria, VA 22314.
OK. I asked if he was trying to get to that address. More wild, nonsensical arm motions, as if he was shoveling or something. Shoveling? Circle? Huh?
I typed out the address where he was on my phone. He squinted, read it, and looked exasperated. He started making more circles. He made a motion like eating.
"Are you hungry?" He shook his head no. Some more gestures that told me nothing.
"I'm really sorry," I said, holding a bag of Afghani dinners in the freezing drizzle. "I don't understand what you're asking. Are you trying to get to that address?" More pointing at his head, circles, shoveling.
Feeling terrible both that I couldn't understand his arm motions, and that I was holding other people's dinners that were getting colder by the second, I finally motioned for the man to follow me. I tried to get him to come inside at least the common room area of my dorm (to stay warm). He wouldn't, so I told him to stay outside and I would be right back. He started calling someone (all the names on his phone were Chinese symbols). I quickly ran to the rooms of people waiting for their dinners. It was reduced to a knock on the door and leaving the food outside their door as if they were all on quarantine. I found the man waiting for me as I was on the way to the last dorm. I stopped again to see if he was able to reach someone. Clearly, no.
"Do you want me to drive you to that address?" He pointed to me, then to himself. I figured this was the best we were going to do to get to "Yes, that's what I need you to do for me." I told him to wait one moment, ran the food up to the last person, and on the way out, I alerted a classmate to what was about to happen. Living in Florida, I am extremely cautious about taking men I don't know in a car. I wasn't scared. Just cautious.
I plugged in the address to Waze. He also showed me a video he had shot of the destination.
"Ah, OK!" It was Alexandria Commons. I knew exactly where we were going.
As we drove there, someone called him back. An animated but relieved sounding Chinese conversation ensued. Then he held the phone toward me.
"Hello? Do you speak English?" Obviously, no. The woman passed the phone to someone else.
"Hello? You are with our friend?"
"Yes, I am driving him to 3221 Duke Street."
"Oh, thank you! Yes, we're a restaurant. Thank you! Can we give you something to eat?" I tried to decline, but they insisted, so I asked for a noodle dish.
When we arrived he (and the chef and the hostess) were all very happy. He insisted on having a couple of selfies with me. They were insisting on me having dinner on the house.
The hostess, who was a young Asian woman named Amy, wanted to know where I found their friend.
"He wandered onto the campus of the Theological Seminary." She noticed my ID card which was hanging outside my coat. From there, we determined that he had gotten turned around trying to find his way to the restaurant. Turns out that he lives in one of the large apartment complexes way up at the other end of Seminary Road. Amy was so happy that I agreed to drive him on a night when nobody wants to be on the road.
"I was going to drive to Baltimore this evening," she told me, "but it's too icy."
"Oh, no. This is not a night to drive to Baltimore!"
As I was leaving with my food, Amy wanted to know if I work at the seminary.
"No, I'm a student."
"Oh? What are you studying?"
"Well, I'm preparing to become an Episcopal priest."
"Oh! So, is that like Catholic?"
"Well, sort of. We left the Roman Catholic Church a long time ago. We're the Episcopal Church."
I thanked them for the food in the only Chinese I know learned from watching too much "Sagwa" on PBS. My grateful friend followed me back out to my car for one more selfie. And we waved good-bye.
Despite language barriers, the language of God is love...which tonight came in the form of rescuing a lost man, delivering him to his friends, and a very delicious noodle dish for dinner from grateful people. My Afghan meatballs, for which I am also grateful, will wait for tomorrow's lunch.
Posted by SCG at 2/13/2021 10:00:00 PM 1 comment: