Pentecost and the Presiding Bishop


The Holy Spirit is on fire, baby, in the form of a wedding sermon that shook up the stodgy ol' Church of England but good.

There have been countless articles, and critiques, of our Episcopal Church's Presiding Bishop Michael Curry and his message that he preached at the wedding of England's Prince Harry and American actress Meghan Markle's wedding in St. George's chapel at Windsor. I don't plan to do any more analysis of the brilliance he brought with his standard message of "God is Love, and Love can change the world!" If you listen to ++Michael Curry enough, you know that he will take you on a journey and the path will always lead back to his main, constant, absolute point: we are the products of a loving, life-giving, liberating God who intends for us to make Love be the cornerstone of our lives and this world. Always.

I could also talk about the significance of having our Presiding Bishop, an African-American, preaching before the royalty and upper crust of a one-time colonial empire which had enslaved his ancestors...and those of the bride's as well. Of course, ++Curry did bring up slavery in his sermon and did note that the slaves, in the midst of their pain and suffering, knew that Love would set them free because "There is a balm in Gilead that makes the wounded whole. There is a balm in Gilead that heals the sin sick soul." Note: these are lyrics of a spiritual and those of us who are big fans of our PB know he will pull out that quote at some point if given the opportunity. I had to laugh when the Diocese of Fort Worth began circulating on Facebook a Michael Curry Bingo Card because we all know some of his trademark images and lines and we know them so well because they resonate (or should resonate) as true to the message of Jesus. 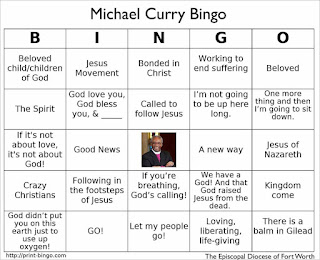 It certainly was on my mind that a real significance, and power, of Bishop Curry preaching at the royal wedding is the posture of the Episcopal Church within the broader Anglican Communion. We are in something like a "time out." We were sent to our room without any supper by the primates of the Anglican Communion in January, 2016, because of the ongoing angst about our church's decision to honor and celebrate same-sex couples who wish to be married in the church. The Archbishop of Canterbury, both present and the former, have balked at allowing marriage rites for same-sex couples in the CoE. And then there are all the African countries whose bishops are tacitly, if not publicly, supporting governments that crack down on queers and put them in jail. So, to then allow our Presiding Bishop to have the pulpit at such a public and watched event all over England and the world was...how shall I say this? Hmmm...Perfect.

And it was perfect. Because what Bishop Curry did was bring to the ceremony the infectious power of God's love which under girds all the human emotion of love that brought the prince and this biracial American woman together. It was perfect because he didn't hold back from raising his voice in jubilation about Love. It was perfect because there were those faces in the crowd who were stone cold to this style of preaching sitting next to people who were smiling and enjoying a taste of what it means to be an Episcopalian in America. I had to laugh because I could see how desperately our very animated Presiding Bishop wanted to get out from behind that lectern and be right there in the congregation as he proclaimed Love over and over again. As he brought up the discovery of fire and how that changed civilization, I could sense that the fire fueling him in this moment was the same Spirit that got into the apostles on Pentecost and had them all babbling in languages they didn't know but were reaching the ears of those desperate to hear a message of hope and Good News. And he was bringing that message to the watching world and to people all over who are living in edgy and uncertain times due to the distinct lack of Love in our politics.

Did Curry succeed? Well, they did a parody of him on Saturday Night Live that night. And, whether they knew it or not, even by making a joke of his repetitious use of the word "Love," they still were giving a nod to Curry's theme of the redemptive power of God's love. And that is a success, in my opinion. It might have been for yucks, but if it caught the comedians attention...that's a point for ++Curry and a score for Jesus.


If you are ever within even a day's drive of a place where PB Michael Curry is preaching, you really should make it a point to go. In the words of the old Dunkin' Donuts slogan: he's worth the trip!