It was a cold and windy mid-November morning when I walked from a hotel in downtown Atlanta through the Sweet Auburn neighborhood. I kept my pace brisk as I crossed street after street, even walking under a major interstate. I passed by many a closed business, and bars advertising prizes for twerking. This was definitely out of my element. But I was on a mission: I wanted to go to Ebenezar Baptist Church, the church that launched the career of the Rev. Dr. Martin Luther King, Jr. 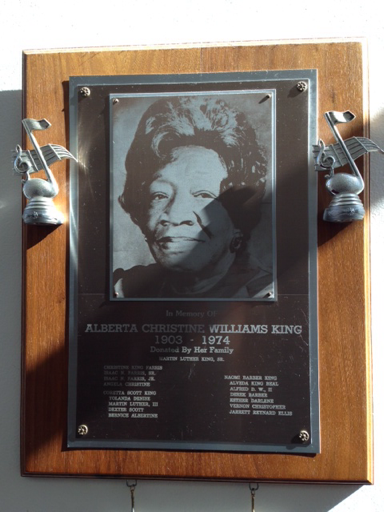 I was not disappointed. The docent at the desk informed me that, in the church basement, there was a video playing of one of Dr. King's siblings telling the story of her brother and her family's involvement in the life of Ebenezer Baptist. King's father was the pastor and his mother was the organist and choir director. When Martin Luther King, Jr. was a child, he used to love to sing. He would grow up to be the co-pastor of the church with his father from 1960 to his death in 1968. The video also told the story of how violence rocked their church about six years after Rev. Dr. King's assisination. It was a Sunday morning. Dr. King's mother had just finished playing and they were starting prayers in the church when a man stood up on one of the pews, announced he was taking over, and began shooting. King's mother was killed in the melee along with a deacon. The 23-year-old who did the shooting said he did it because he was opposed to Christianity.
With that in my head, I ascended the steps to the sanctuary. There was only me, and one other couple. They left fairly soon after I got there, which gave me the entire space to myself. Me, an empty sanctuary with flowers and an old-fashioned microphone on the pulpit and the recording of the Rev. Dr. King's sermon, "The Drum Major Instict." 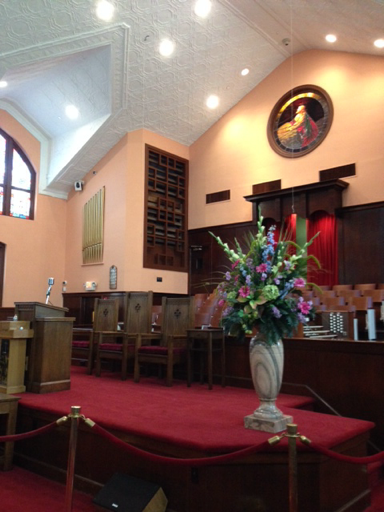 I was deeply moved as I sat and listened to his voice filling the air. I knew the Scripture passage well, the moment in which the brothers are arguing and asking Jesus to give them the seats of honor on his left side and the right side. It is a moment in Jesus' ministry where I often wonder, "Did these guys who were following him here, there and everywhere have a clue as to what he was doing?" The presumption of these two guys, John and James, that they could ask Jesus to make them first ahead of the other disciples is pretty amazing, and yet, pretty typical of so many of us. That's what Rev. Dr. King referred to as "the Drum Major instinct."  I sat at times with eyes closed as I took in how Dr. King put this tale into his modern day situation in 1968. People putting themselves into financial crises by attempting to live beyond their means. Nations putting themselves and their people at-risk by asserting that their way is superior to the way of other nations. Racism, and how poor whites had deluded themselves into believing they are superior to blacks while suffering under the same oppression and injustice plaguing communities of color. And he turned his own sights back to Jesus for the role model of what real leadership looks like. I wept as I heard Dr. King say of himself that at his funeral he didn't want anyone to go on and on about him. He didn't want to be known for the many accolades he had accumulated. He didn't want them to talk about his Nobel Peace Prize.
"Tell them I tried to love and serve humanity."
Little did he know, he was preaching his own eulogy. His wife requested that this sermon be played at his funeral.
Little did I know this mission to find and visit his church would leave such an impression on me. I heard in his sermon many things I have felt for myself as one who has kept plugging away at the struggle for equality particularly for LGBTQI people. I don't work for justice so that I can get awards. I work for justice because I can't feel comfortable knowing that others are struggling. Yes, we have finally achieved marriage equality in Florida. But people are still able to be fired from their jobs if they get married to their same-gender partner. The Roman Catholic diocese in South Florida has made it clear to all its employees to "beware" of making public comments on social media about the marriage issue that might "contradict" traditional Roman Catholic doctrine. The Episcopal diocese of Florida has not even acknowledged that there has been this sea change in the civil marriage laws. We have made progress. But this march is far from over. And so I'm lacing up my shoes, ready to walk the path that is laid before me.
Posted by SCG at 1/19/2015 11:40:00 PM No comments: 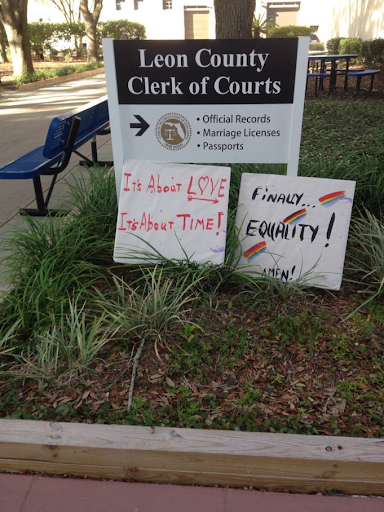 Overwhelmed. Goose bumps. Tears. Lots and lots of tears.
I'm frankly too spent and have no more words to describe what an amazing day this has been. All of our city commission and mayor, and the majority of the county commission stood in the entrance of the Leon County Clerk of Courts office to greet us, the LGBTQI community seeking marriage licenses for the first time in Florida history.
It was joyous. And a wonderful counterbalance to today's other activity; the inauguration of the people who have been fighting us every step of the way.
But today wasn't about them; it was about us. This is the day that Lord has made. Let us rejoice and be glad in it! 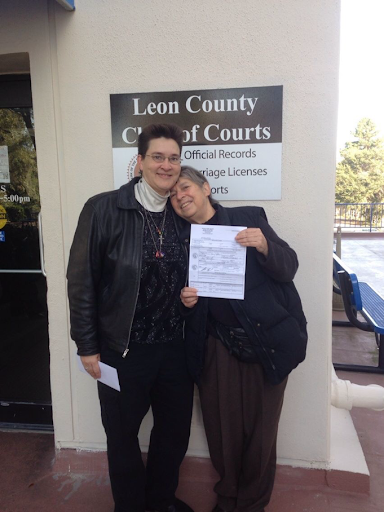 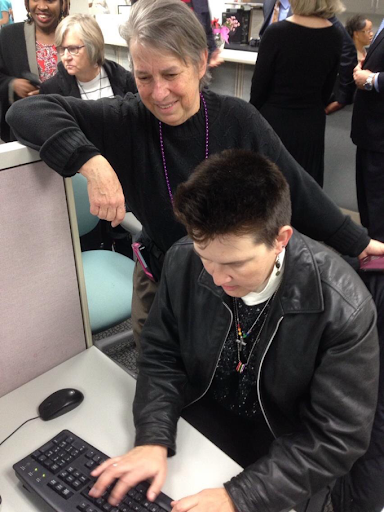 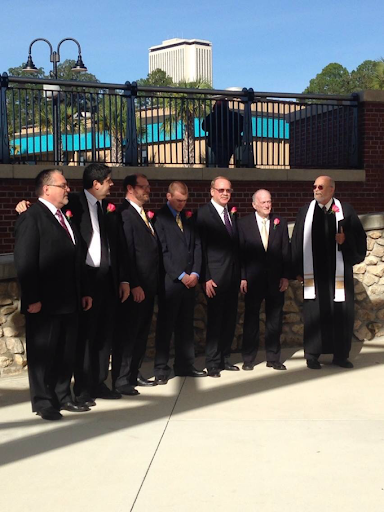 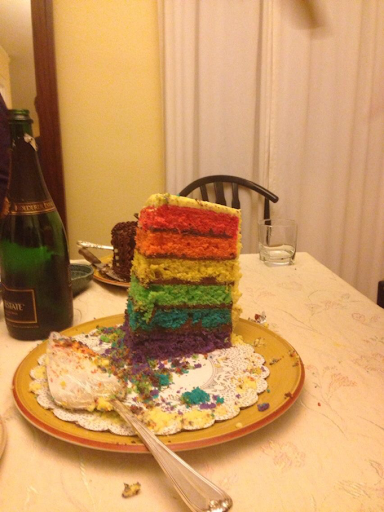 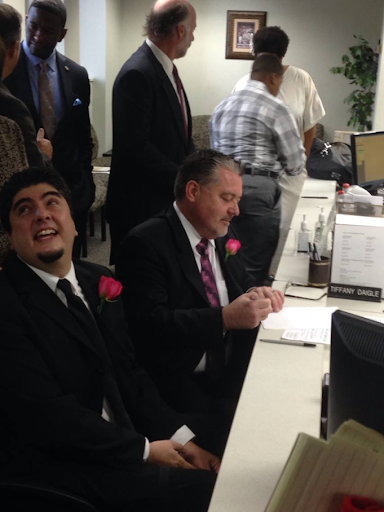 At 12:01AM, January 6, 2015, the LGBTQI community of Florida will receive a gift. It won’t come in a box, wrapped in paper with a bow on top. It’s not something that can be contained in a bottle of bubbly, or put in a stocking. It’s a gift that comes in a legal opinion authored by United States District Court Judge Robert Hinkle declaring Florida’s laws, both in the state constitution and state statutes that limited marriage to heterosexuals only, to be in violation of the United States Constitution; hence marriage equality will be coming to Florida. In the words of Judge Hinkle:

"When observers look back 50 years from now, the arguments supporting Florida's ban on same-sex marriage... will again seem an obvious pretext for discrimination. Observers who are not now of age will wonder just how those views could have been held. The institution of marriage survived when bans on interracial marriage were struck down, and the institution will survive when bans on same-sex marriage are struck down. Liberty, tolerance, and respect are not zero-sum concepts. Those who enter opposite-sex marriages are harmed not at all when others, including these plaintiffs, are given the liberty to choose their own life partners and are shown the respect that comes with formal marriage. Tolerating views with which one disagrees is a hallmark of civilized society." (Judge Hinkle, August 21, 2014)

Pardon me while I wipe away tears.

This has been a long slog for many of us. When my partner and I were first dating and I asked about having some kind of a commitment ceremony that was all we could hope for. It wouldn't come with state and federal recognition, so that we might have benefits and protection of our property. And certainly, neither of us at that time conceived of having our union blessed. (Neither of us was active in a religious community, and the Episcopal Church wasn't 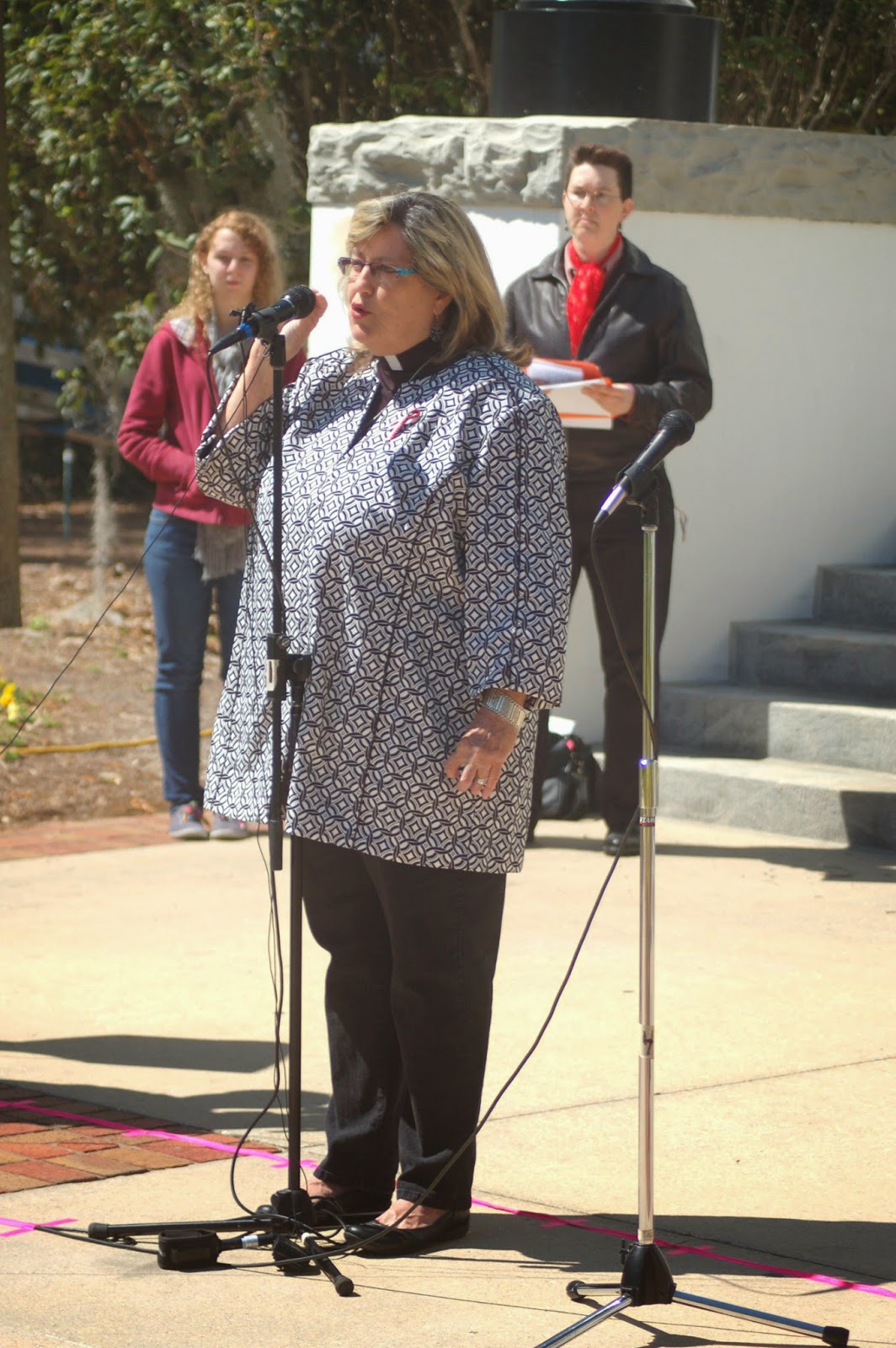 anywhere close to blessing same-sex couples!) When the movement for marriage equality began in Hawaii, and then had success in Massachusetts, it was intriguing, but still seemed a far-fetched notion that this would catch on, especially in Florida.

And Vermont, Connecticut, New Hampshire, California (on again, off again, on again) the District of Columbia…

As marriage equality was becoming a reality, opponents continued their fight. It wasn’t enough to have marriage outlawed in four places in the Florida statutes; they needed a constitutional amendment.

And they got it…with just over 61-percent of the vote in 2008. It was a moment of bitterness to realize that a majority of those who cast ballots in an election that helped put Barack Obama in the White House also brought out voters who were willing to make me and my partner second-class citizens. It was devastating.

And so we marched. We shared our lives and our stories. We organized. And we filed lawsuits. 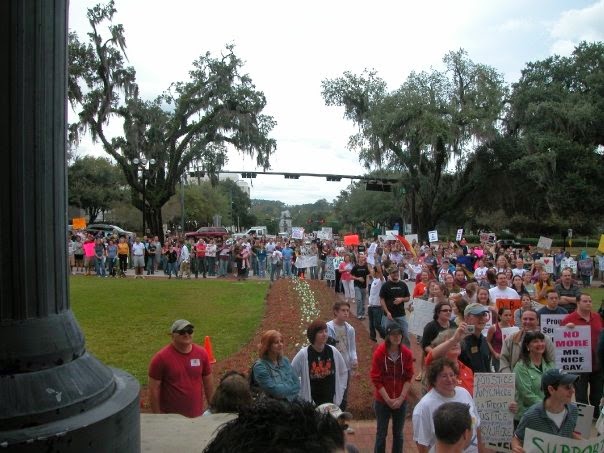 And we won a victory in June, 2013, in the United States Supreme Court with the Windsor decision.

Quickly, the dominoes began to fall. State after state, some by popular vote, many by court order. Secular and religious leaders were standing up for our rights. Even President Barack Obama arrived at a place where he was comfortable saying he had no problem with marriage equality. 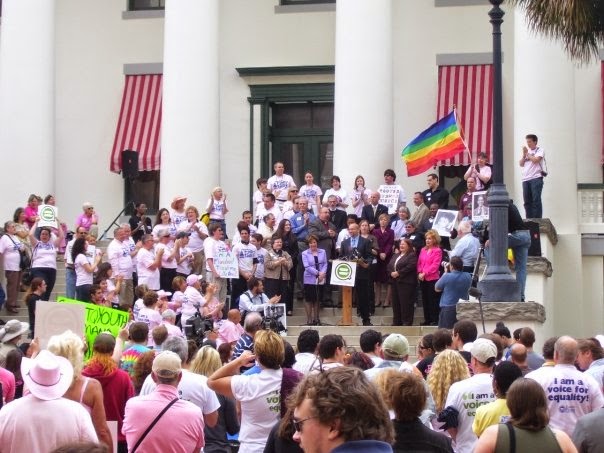 Still, as all this happened, those of us in Florida kept wondering, “When will this be our reality?”

That time has arrived. Not without pain and suffering through the attempts to stall Judge Hinkle’s order. But it has now really arrived.

That this moment is coming to pass on the day that Christians celebrate the Epiphany, the arrival of the Magi bearing frankincense, gold, and myrrh, could not be more perfect. These wise men following a star in the east come bearing gifts to one whose purpose will be to spread the Good News of Love. They are overjoyed at the sight of this child, born in exile, and unpack their treasures for him.

This is very much what this moment in our state’s history feels like. The courts have followed Wisdom that has led justices to bestow upon a community, singled out for who we love, with the gift of equal rights in marriage. 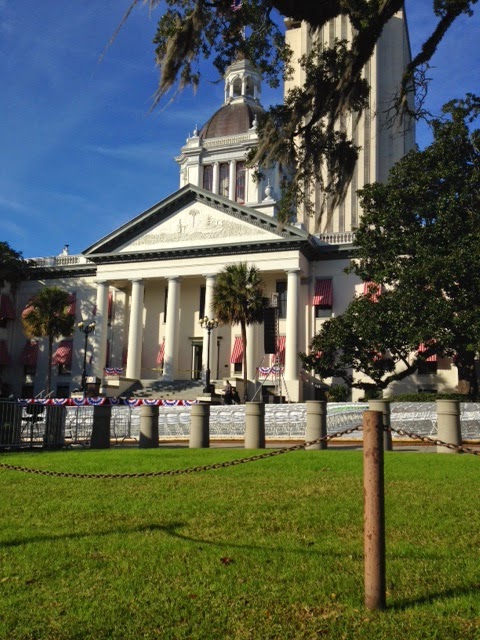 It is also not lost on me that our wonderful happy day is coming on the same day that the opponents of the LGBTQI community will be taking the oath of office for another four-year term. John Stemberger, the man who put the noxious anti-marriage amendment on the ballot in 2008 is on the guest list for the pre-inaugural prayer breakfast. There are clerks of court in Baker, Clay, Duval, Okaloosa, and Santa Rosa Counties who have responded to the ruling by ending the tradition of courthouse weddings for anyone rather than be compelled to marry a lesbian or gay couple. Without statewide, or in many places county protections from discrimination, we may get married, but we aren’t necessarily protected from losing our jobs, housing or access to public accommodations. After the Magi left the manger, Mary and Joseph had to stay on the run with Jesus because King Herod was out to kill him. Love seems to never know complete peace or absence of fear and loathing in the world. We are still a long way from reaching full equality.

For now, however, the celebrations are on. My partner and I will be heading to the clerk’s office to make our application for a marriage license. It will be a lovely step forward in this 23+ year “courtship” and the start of the state-recognition of our marriage. Let the wedding bells of freedom peal out over the Sunshine State.