God is with us: A Homily for Blue Christmas 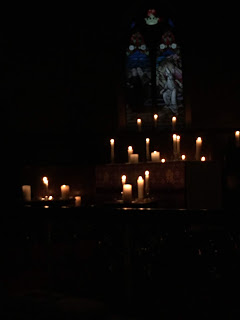 “Now the birth of Jesus the Messiah took place in this way. When his mother Mary had been engaged to Joseph, but before they lived together, she was found to be with child from the Holy Spirit. Her husband Joseph, being a righteous man and unwilling to expose her to public disgrace, planned to dismiss her quietly. But just when he had resolved to do this, an angel of the Lord appeared to him in a dream and said, “Joseph, son of David, do not be afraid to take Mary as your wife, for the child conceived in her is from the Holy Spirit. She will bear a son, and you are to name him Jesus, for he will save his people from their sins.” All this took place to fulfill what had been spoken by the Lord through the prophet:
“Look, the virgin shall conceive and bear a son, and they shall name him Emmanuel,”
which means, “God is with us.” When Joseph awoke from sleep, he did as the angel of the Lord commanded him; he took her as his wife,but had no marital relations with her until she had borne a son; and he named him Jesus.”
O come, O Bright and Morning Star, and bring us comfort from afar! Dispel the shadows of the night and turn our darkness into light.
Rejoice! Rejoice! Emmanuel shall come to thee, O Israel.
In the name of God, who is Father, Son and Holy Spirit. Amen.

“God is with us.”
After “Do not be afraid” those are probably some of the best and kindest words spoken in the Gospels. And yet...they can also feel like a hollow promise, especially when we are feeling cut off from God, isolated and alone.
Our gospel reading doesn’t speak directly to these feelings. But if we consider the situation presented, we can rightly get a glimpse of what was happening for the Holy family of Joseph and Mary.
“Before they were engaged...Mary is pregnant by the Holy Spirit.”
Not by Joseph. Such a situation was troublesome for Mary, a young woman, who is carrying a child she’s been told will save her people who are living under oppressed and corrupt circumstances. That’s a lot to take in...and having to tell this to your beloved with whom you haven’t had sexual relations. “Joseph...I’m pregnant by the Holy Spirit.”
Imagine Joseph in this situation. He loves Mary. She has promised to be his wife. But she’s pregnant. And he’s not the father. This is scandalous. He is aware of the danger he will be putting Mary in if he exposes her. This is an honor/shame society they’re living in, and not only will this bring shame upon her and him...it will mean that Mary can be ostracized for this betrayal, put out from her community. And with no knowledge of who is the father, her child would be permanently cut off. Such a life would likely have led to them being beggars and her child may have failed to thrive.
It doesn’t take a lot of imagination to understand the sense of loss, feeling broken and the fear that is hanging like a cloud over both of them.
Can Mary trust Joseph to believe her?
As for Joseph...can he think his way to a resolution of this seemingly impossible situation?
Can he love her enough to let her go quietly so that she isn’t killed by the cruelty of the culture?
Enter the angel into Joseph’s dream. We hear the words, “Do not be afraid” and the promise that this child is “God is with us.” Through his own doubt, and sense of feeling isolated and having to solve what he thinks of as a problem...Joseph is reassured that he is not carrying a burden; he’s being entrusted to keep Mary and this child safe.  He follows through...and we learn in later verses in this Gospel that he keeps listening to the visitors in his dreams and hurries his young family off to Egypt to escape persecution. They are refugees...in a strange and foreign land...seeking shelter from a rageful and jealous King Herod.
And it is into this troublesome, uncertain, and filled-with-worry world in which Jesus is born.
“God is with us” does not come into safety and security with soft-focus Hallmark lighting.
“God is with us” in the time when things feel the most off-kilter and out-of-balance.
“God is with us” and meets us where we are in whatever state of mind or condition that is...and remains with us through the highs and lows of life. This is the Christian hope which comes to us at Christmas time.
The visual reminder of this promise is in the Advent candles that we’ll be lighting in a few moments. As we look into those flames dancing on the end of the wick, I invite us all to see the promise of light penetrating through the clouds of our conscious minds. This light shines into our hearts the eternal reminder that God is with us...now and always.

(10am: May the words of my mouth and the meditation of our hearts be always acceptable in your sight, O Lord, our strength and our redeemer. Amen.)