Something is Terribly Wrong: a Good Friday sermon

Something is terribly wrong here.

Jesus, the man who has healed and cared for the sick, taught and preached a message of love to people living under the oppression of the Roman regime, a man who prodded the powerful to remember that they are serving God and not the letter of the law, hangs rejected and mocked on a cross to die. He was betrayed by one of his own. He was abandoned by most of his friends. He endured what was basically a trial by the kangaroo court and found guilty of the crime of being an upstart and one who dared to speak truth to the worldly powers of his day.

Jesus knew his entry into Jerusalem was going to cause a stir. In an act of defiance and highlighting the disparity of the prevailing power structure, he came down from the Mount of Olives into Jerusalem riding on a donkey. And while throngs gathered to greet him with palm branches and shouts of “Hosanna in the highest,” the Roman Governor, Pontius Pilate, and his army were riding into Jerusalem on horses in a show of military might.
The lines are drawn and the contrasting images are clear.
Let the showdown begin.

While in Jerusalem, Jesus enters the temple and sees that it has ceased to be about praising the glory of God the Father and instead has become in worship of God the Barter. This is the Wall Street of Jerusalem. In one of those few moments where we see Jesus exhibit the very human emotion of anger, he is flipping over tables and chasing out the money changers. It’s not hard to imagine that those most concerned with commerce were alarmed and resentful of what he did, and might want to put an end to this preacher and his “Get back to God” message.

The religious authorities also were not too keen on what Jesus had to say either. They would come to him and challenge him:
“By what authority are you doing these things?”
And Jesus, imbued with Godly wisdom, uses his rabbinic knowledge to turn the tables on them. The Evangelist Mark captures the exchange in this way with Jesus posing a question of his own,
‘Did the baptism of John come from heaven, or was it of human origin? Answer me.’ They argued with one another, ‘If we say, “From heaven”, he will say, “Why then did you not believe him?” But shall we say, “Of human origin”?’—they were afraid of the crowd, for all regarded John as truly a prophet. So they answered Jesus, ‘We do not know.’ And Jesus said to them, ‘Neither will I tell you by what authority I am doing these things.’(Mark 11:30-33)

Now he has shown the religious leaders to be hypocrites, and offended their place of power and importance. Risky business indeed. In no time, he has made enemies of the religious, political and economic powerful in Jerusalem.
Jesus was encouraging people to return to the premise that God, who is Love, should be the center of praise and the basis for how they lived, moved and had their being.

Love would free them from the bondage of sin and death.
Love would heal them and give them strength.
Love would empower them to do justice, love mercy, and walk humbly with God.
Love would bring them life!

And so for these offenses…Jesus is nailed to a cross to die because he was calling for a new way. They mocked him. They pierced his side. They left him to die. He had challenged the religious, political, and economic status quo. And they didn’t like it. At. All.
As our presiding bishop noted in his sermon at this winter’s revival at Honey Creek, “Always be careful when religious, political, and economic interests come together. It was trouble in the First Century, and it’s trouble today.”

If we think back to Ash Wednesday of this year, we might recall the image of a woman named Michelle. We don’t know Michelle’s last name. But we know the anguish on her face. We recognize the black ash cross prominently displayed on her forehead. She is holding another woman, and they are in shock and horror as they await word of what had happened to their children attending Marjory Stoneman Douglas High School in Parkland, Florida. It was a powerful photo and came to symbolize the tragedy that unfolded in that community. It was a stark reminder that the idea of “we are dust and to dust we shall return” is a literal truth and can come when we least expect it and in ways to terrible to contemplate. It is the same pain so many mothers throughout America, across racial and ethnic lines, have found themselves having to endure after learning that their children have been victims in a mass shooting. We have witnessed their suffering so many times now that one could almost become numb to it.

I imagine that the Blessed Virgin knows their pain. She has been there, standing hopelessly, watching her son in agony as he seeks comfort in the words of Psalm 22. As Mary, and the other women, stood at the foot of the cross more than two-thousand years ago, they might have looked broken and devastated…felt their knees buckling under the enormity of their grief. Holding each other close, the women stare up at the cross and wail, “Something is terribly wrong here!”

But here is the “Good News” and the reason we can call such a long and terrible day, “Good Friday.” As God has done many times before, what was meant for bad, God will redeem and make it good. Love may be patient, and kind, according to St. Paul (1Corinthians 13) but it’s also stubborn and will not be so easily vanquished.
Love will have the last word…both with the resurrection of Jesus and even in post-Parkland America.

So how do we live into the call to love more deeply and do the heavy lifting so that the kingdom of God is on earth as it is in heaven in light of such difficult and troubling times?

Jesus’ death…as terrible and gruesome as it was…would be a transformational moment for the women and men who had been his disciples. Despite their fears, Joseph and Nicodemus would give Jesus a proper Jewish burial. Mary would visit his tomb and discover him resurrected. The resurrection did give the disciples, who were frightened and worried that the Romans were going to kill them next, the courage to be bold and outspoken…taking up Jesus’ mantle of preaching Love. His death upon the cross for them, as for us, is not just a terrible and awful death; it is the gateway to a bigger, bolder, and brighter life. Even now…some two thousand years later…Jesus’ act of selfless love is calling us into our own version of the Jerusalem movement to see that when something in our world is terribly wrong, it is our mission to make it right...even at the risk of being at odds with the status quo. 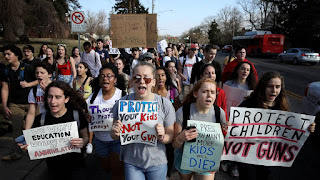 I had a thought as I woke up this morning, the day when, once again, people will be taking to the streets for the March for Our Lives:

This Sunday, Christians the world over will be marking Palm Sunday. It is the day that we celebrate Jesus' triumphant entry into Jerusalem for his final showdown with the ruling Roman oppressors. Some theologians have characterized this moment as an act of defiance and protest by Jesus. He entered the city of Jerusalem on a donkey, a show of humility, while the Romans and Governor Pontius Pilate rode in on horses in a show of might at the opposite end of the city.

Today, we will participate in and bear witness to a march led by teenagers, many of whom are not yet old enough to vote for or against the political leadership in this country that has allowed for such porous gun laws that make mass murders possible.

They will not be riding into Washington, or other cities, on donkeys. There will be no palm branches strewn in the streets in front of them. And yet, this is an act of defiance and to raise up the needs of those who have suffered for too long with the threats of death by military-style assault weapons in the hands of civilians. And at the DC march, the teenagers have turned away the powerful who have almost a pathological need to be "seen" at these events in favor of those who must be heard: teens and young adults raised in what they call "the Mass Shooting Generation."

Think about it: today's sixteen and seventeen year old was not alive at the time of September 11th; hence they have never known a world where people could pick up and drop off at the airport curb without harassment from police. They have never known flying where there weren't TSA agents. They don't remember the days where you didn't have to take off half your clothing just to go through a metal detector or store your shampoo in a zip lock bag in tiny travel-size bottles. They were all born after the 1999 shooting at Columbine. They have had to do fire drills AND active shooter drills. They have watched countless shootings happen at shopping malls, movie theaters, concerts, night clubs, schools. And all the while, they have watched adults try to reason their way out of taking any action while those who have cried out for stricter gun control have been made to accept that their political leaders will never do anything because they fear the NRA more than they do the voters. We have been too complacent. And our complacency has made us appear complicit with this acceptance of body counts. In other words, these teens have grown up in a fear-filled world; therefore, they do not fear standing up for their lives in hopes that we might end this insanity.

These teens have now called B.S. to all of it. I couldn't agree more.