Glimmers of Hope: A Sermon for Proper 14C 9th Sunday After Pentecost 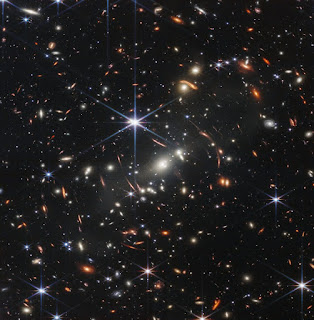 A wonderful thing happened last month that I think got lost in the shuffle of all the other ‘things’ happening in our lives.

Amidst all the grim news of floods, fires, and politics… science gave us a reason to pause and reflect on the awesomeness of our world.

I’m talking about the marvelous images sent to back to us from the James Webb Space telescope.

The project was launched on Christmas Day of last year. The hope was to probe the universe for galaxies and planets that might have Earth-like atmospheres.

What was beamed back to us was nothing short of incredible.

Even more detailed that what we’d seen with images from the Hubble telescope… these photos took us deeper into space… beyond our own galaxy… and revealed the brilliance of what exists “out there.”

These snapshots have given us a glimpse of what might possibly be the first lights created 13 and a half billion years ago.

This is the closest look we’ve ever had of the beginning of time.

There were images of galaxies swirling and star beams dancing in the darkness.

There was so much joy with astrophysicists and NASA engineers giddy at these discoveries and bursting with excitement as they shared them with all of us.

What an awesome reveal…all these photos.

They are so mesmerizing.

The type of thing that one could just stare at and never feel tired.

I’ve always been fascinated by the night sky.

I love looking at the moon and the stars.

I’ve often wondered… as I counted what few stars I could see with just my own two eyes…what else is out there?

Could Star Trek be right?

Are there other galaxies with other creatures wondering about what might be happening in that place called the Milky Way?

The images from the Webb space telescope reawaken that interest in what might be.

Maybe there could be other life forms out there.

The more I browse and study these photos…the more I am reminded of this passage from Hebrews.

“By faith we understand that the worlds were prepared by the word of God, so that what is seen was made from things that are not visible” (v.3)

Faith demands us to have hope in those things we cannot see… but will become clear in the unfolding of time.

I imagine when Abraham stepped out of his tent and saw so many stars… he might have doubted the promise that he would be the father of so many descendants.

“As many as the stars of heaven and as the innumerable grains of sand by the sea.” (v.12c)

Logic would have said that such a promise was absurd.

And then Sarah and Abraham became pregnant with Isaac.

The NASA scientists said they weren’t so sure their Webb space telescope would be successful.

But because of their willingness to trust and hope for success… we now have been given the gift of seeing another layer of the creation in all its splendor.

And I can imagine God delighting in our discovery… and calling out to us to keep searching because there’s so much more to find.

To have “faith…in the things hoped for, the convictions in the things not seen” (v.1) begins with a willingness to go seeking.

It requires letting go of the “known” and being willing to venture into the unknown.

When we open ourselves to the experience of moving out beyond our preconceived ideas… and our old set ways of doing things, our heart expands.

We can look at things in new ways and even understand the experience of another person.

It seems quite appropriate that we have this reading from Hebrews as many of our children are starting back to school in the city and county and Valdosta State will be gearing up for another semester.

Schools serve as that opportunity for students, teachers, and professors to step out into something of a wilderness of learning on a journey toward discovering new information with each other.

To learn anything… both parties must have enough faith and trust in each other to begin.

This is true of all new relationships… be it a job or even a romance.

Our faith comes from trusting and having gratitude for God’s unconditional love of us that he would have given Jesus to us to set the standard of what it means to walk and live in love for one another.

Through this loving relationship… God empowers us to bring about a world that puts love of God and each other as the center of our being.

This faith is the bedrock which allows us to build relationships… allowing us to even work across our differences.

We might even discover the image of God in people who we at first didn’t like or trust.

Perhaps we might start tackling problems that we’ve been ignoring because we didn’t have enough faith that we could work with each other.

I have seen what I believe to be the seeds of such faith emerging from our Lambeth Conference.

You’ve heard me mention this meeting of the bishops before.

It’s not a legislative body or any kind of governing structure. What the Lambeth Conference represents is an opportunity for the bishops of the Anglican Communion—all the churches that trace their history back to the Church of England—to come together every ten years or so to study and talk with one another about the issues they’re encountering in their parts of the world.

These discussions help fuel ideas that the bishops can carry back to their respective dioceses and provinces.

The past two conferences were fraught with tension.

Some churches…including The Episcopal Church representing the United States as well as churches in Europe and the Caribbean… have made steps to include the LGBTQ+ community into the full life of the church.

Bishops… mostly from Africa and Asia… have objected to this, and especially to our church’s position on marriage equality. And since 1998… there have been numerous attempts to take the Lambeth Conference in a direction of punishing The Episcopal Church for accepting LGBTQ+ Christians.

There was another such attempt to do this at this latest conference.

But unlike the times before… there were gay and lesbian Episcopal bishops present.

There were those bishops who’ve come to see, know, and experience lesbian and gay Christians.

And there was the understanding that our Church could bring to the Conference to demonstrate how to live in love with one another recognizing the diversity of human sexuality.

We… and some of the other provinces… could bear witness to the reality that faith is a journey without a need for a set arrival date at the destination, but a willingness to trust in the Holy Spirit who will not leave us comfortless.

In turn… bishops from Africa and Asia shared their truth.

They spoke of the threats they’ve faced from hostile governments who consider these bishops part of some larger Western conspiracy to undermine the laws of their countries.

And more than 600 bishops from 165 countries agreed to trust God and each other to lay this issue down and stop demanding to have winners and losers in this struggle.

That is an act of faith.

Where we go from here is a great unknown.

But what seems clear is that there is a willingness on the part of all sides to stay on the journey with each other.

No more threats to walk out.

No more calls for sanctions.

Look to the one who gave himself in love on the cross and remember that he died and rose again so that we could all have life and be a beloved community… and children of God.

This is gift of faith surrounds all of us… reminding us of who we are and whose we are.

God invites us and even beckons us to move out of our comfort zones of certitude…and our human need for right and wrong… open the eyes of our heart and step onto the path of faith.

We may pass through a fog of doubt and uncertainty…and we may not readily see what’s ahead.

But even as we venture out… beyond our own personal universes… we are never…never alone.