Be Ready to Change: A Sermon for the Second Sunday of Advent Year A 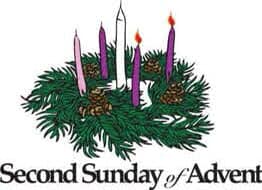 This is probably one of the toughest seasons of Advent that I've had in awhile. What I realized as I was preparing to get online with my Spiritual Director is that I am dealing with a great amount of fear and depression and anger after this last election. As a Democratic voter in Florida (please note: I said "Democratic voter" not "Democrat." I think the party is pointless), I have been totally stripped of any real representation. And what has taken hold in this state is a brand of authoritarianism that would make Hungary's Victor Orban swell with pride.
It has made preaching even more challenging. When my head is foggy with depression, it is hard to pull together coherent thoughts. Particularly thoughts that I must not simply preach...but live into myself.
So here's where I went....

Prayer: Wise and loving God, awaken within us a desire to hear your Word, so that we may learn to walk in your ways and be the bearers of your compassionate light. Amen.

This week… I was picking up some clothes from the dry cleaners in my neighborhood.

I had made sure to bring a pen into the shop with me to sign for my receipt. But the attendant looked at me and smiled.

I put my pen away, we exchanged a few more words and then I loaded up the car and went on my way.

It made me contemplate the things that change in our lives due to some catastrophic event…like a global pandemic.

We’re now used to taking off our shoes and belts and having to practically unpack our carry-on bags before getting on an airplane.

Highway crashes and deaths finally compelled the use of seat belts in cars and the institution of speed limits on the roads.

The murders of George Floyd, Breonna Taylor, and Ahmaud Arbery remind us that racism and unconscious bias along racial lines is still our ever-constant companion.

At the same time, those incidents…broadcast so widely during our pandemic lock down… appeared to have disturbed and awakened at least some more white people to the problem of racism and how it plays out in ways that are baked into our culture. It’s an alarm that has been going off repeatedly for decades…but we just keep hitting the snooze button.

The need to wake up… and become more aware of what is happening around us is an important theme of this season of Advent.

If we’re going to be prepared for this inbreaking of God…we better not be dozing off in a corner.

Fortunately…we have prophets such as Isaiah and John the Baptist who won’t let us pull the covers up over our head.

The prophets keep rousing us and pushing us in the direction of repentance.

That word…” repentance”… carries such a heavy weight… and for some of us… it’s a weight too much to bear.

So how about if I use its true meaning:

These prophets keep pushing us to return to God…rethink the path we’re on and move toward something like what Isaiah describes in our first reading.

Isaiah gives us a vision of a world where we all get treated with respect and dignity.

Natural born enemies and predators not only stop hurting one another.

They’re able to be in contact with one another.

Not one creature is on edge, afraid or murderous toward the other.

Paul confirms that same vision in his letter to the Romans. He describes a reality where Jews and Gentiles can say those words from Dr. King’s “I Have a Dream” speech:

What both the prophet Isaiah and the apostle Paul are seeing is a world filled with hope.

A hope of what can be…but is not yet.

A hope built upon the faith that when we turn from centering on our selves and return to God…not only will we change….the change in us can begin to effect a change in the world around us.

That’s what I think John the Baptist is calling on us to be: agents of change.

John was a change agent himself.

If we remember the story of his birth… it was Mary’s elderly cousin Elizabeth who was John’s mother. His father had been struck dumb because he couldn’t believe his wife was pregnant.

When John was born and everyone demanded to know the child’s name… nobody wanted to believe Elizabeth when she said, “His name is John.”

So… patriarchy being what it is…the crowd went to Zechariah, the father.

When he wrote down that the child was named John… miraculously… his mouth opened… and he began singing praises to a liberating God.

John’s birth… like any child’s birth… changed the lives of his parents… in strange and powerful ways.

Now we meet him as a grown man, the one who is “the prophet of the Most High.”

John was fed up with the religious institutions of his day… and he went to live out in the Judean wilderness to lead a group called the Essenes.

He was into a “let’s get back to basics” kind of religion; hence his camel’s hair shirt… and his diet of locusts and wild honey.

Clearly there was something about him that fascinated people. Crowds were walking out to meet him by the River Jordan.

Maybe they were like him, dissatisfied with what they were getting from their more orthodox leaders.

Maybe they were just curious onlookers.

But when the Pharisees and Sadducees show up… John is irate.

For him… these religious leaders had become too attached to the “things” and “rules” and in fact were metaphorically killing their own people’s souls through these attachments.

The term “brood of vipers” refers to newborn vipers which ate through their mother’s stomachs to be born.

Obviously… John didn’t have much love for these two groups!

For John… the Pharisees and the Sadducees were the representatives of a religion that was happy to go through the motions… say the right words… in the correct order.

But to allow their faith to actually change them and become agents of change?

God could get as much change out of the stones!

John was heralding in a new era…one which was going to challenge the status quo to change.

Get back to building the type of beloved community that was waiting to spring forth from the root of Jesse that Isaiah was talking about.

There’s an Italian film by Paolo Pasolini that tells the story of the Gospel of Matthew. In the depiction of this scene at the Jordan…when John is taunting the Pharisees and the Sadducees… the leaders look ashamed and hustle away.

The change John demands of them would require them to give up too much…or at least that’s what they believe.

And nothing… and I mean nothing… will threaten the ego more than to having to let go of any part a well-curated sense of self.

This tension between the need or even desire to change… and the fear of what that change might cost us…is an ongoing struggle for us humans.

We seem to be able to make changes and adjustments when a cataclysmic event happens…at least for a short while.

But we don’t need to wait for a pandemic or horrible attack… or a threat for us to seek a new way to live and move in the world.

Real… and lasting change begins with looking at ourselves…and asking the questions of ourselves.

What prejudices must we allow to die to bring about new life?

What old ways are we clinging to that no longer aid us in our spiritual growth?

Have we grown too comfortable with the way things are that we can’t imagine a different future?

These are some of the questions that the prophets nudge us to contemplate for ourselves.

The more we are willing to engage with such questions…the better chance we have to move this world in a Godward direction.

Remember John’s words about Jesus… that Jesus baptizes us with the Holy Spirit and fire.

Each of us have been brought into the body of Christ through that baptism.

That fire…that spark of Christ within each of us…is ready to burn away those things which keep us from changing and growing into the people God needs us to be.

The light on our Advent wreath is one candle brighter this week.

May it serve as a symbol of a growing light within each of us.