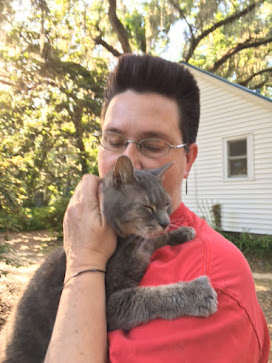 Reunited after three years of seminary

I am heartbroken to post that our beloved sweet and very loving cat, Kyrie, has crossed over the rainbow bridge to be reunited with her dog pal, Sammie, her true love, Boris, and to find her Nana Gage, who she adored and liked boys as much as she did. She probably does not want to see her brother Ziggy, so we won’t go there and the sister she never met, Pepita, wouldn’t want to meet her.

We “poached” Kyrie at Railroad Square one night during a run of the fall Faust cabaret. Her G-dmother, Dr. Sherri Kasper, was in the cast and helped to capture this tiny gray kitten that chased a bug into our dressing room. Her Aunt Beatrice and Uncle “Mr. Boy” Matt took her to our house after we were introduced to this little creature, pounding her paw through the dilapidated beer box that was serving as her makeshift cage. Her feisty nature was the signal that we had found a new cat.

Kyrie started out quite feral. She did not want us to talk to her or touch her and if we picked her up, she would try to swat us in the lips. Gradually, once she was over the insult of having been removed from Railroad Square and provided an 1100-square foot house with beds and chairs and other luxuries, she allowed the “tall one” (who would later become “Christian mommy” or “Shabbos Goy”) to interact with her. I would sit outside to do crosswords, and she would wander around the yard and then eventually sit with me and let me touch her.

It was only after we made the fatal mistake of adopting Ziggy, a lanky orange boy cat who was the perfect annoying little brother, that she learned to be truly affectionate. She saw how Ziggy would get things because he loved to sit in our laps and ride on my shoulders. Shortly before his sudden death, Kyrie came to me one night, let out a mournful meow (she normally just trilled) and jumped in my lap, allowing me to pet her for an hour. She wanted me to know that she knew how to be a lap cat, too, and that I was forgiven for bringing Ziggy into the fold. Following his death, she became very affectionate toward both of us, and enjoyed when I would carry her around the house in my arms or on my shoulder and let her look at the world from a higher angle.

When she was young, Kyrie liked to have me roll rocks down the driveway so she could chase them. She was very good at batting them down and loved to hop like a rabbit when she got particularly excited. She was an excellent huntress, and once treed a raccoon. For a time, she would play with a miniature dachshund named Patty. Patty’s owner would bring her over to the house and the two of them would do sideway ninja runs across the back of the furniture in the living room and wrestle and tumble around on the floor.

When Isabelle converted to Judaism, I made a promise that we would raise Kyrie to be Jewish. This was in response to the question that had been posed to Isabelle about how she planned to “keep a Jewish household living with a non-Jew (aka me).” Kyrie enjoyed sitting with her “Jewish mommy” when she would listen to practice recordings of the Temple Israel cantor as Isabelle was learning her Torah portion. Kyrie never quite understood rules of kashrut, believing that the rules did not apply to “mountain lions” (she was small, but believed herself to be bigger). For years, Isabelle made Kyrie’s cat food to counter all of her peculiar ailments that we suspected might have a connection to her diet. This might account for her longevity.

She always seemed to enjoy listening to the sounds of Hebrew…and would often walk out on me during Christian services the minute we started to recite the Apostles or Nicene Creed or the Lord’s Prayer. She never understood, nor did she appreciate, my absence to attend seminary. She finally made her displeasure known when she peed all over my first-year notebooks (thankfully, she waited until AFTER I took the General Ordination Exams!)

Her decline started about two weeks after her 19th birthday. We had lots of suggestions of what might be happening, but in the end, it is unknown exactly what made her go downhill so quickly. And this last week has been very difficult to watch her lose all interest or ability to eat. As hard as it was to make the decision to have her put down, it is the best decision.

We are going to miss her very expressive little thumb tail, her trilling which in these last few years developed into full-throated meows, and how she was always wanting to greet us and anyone who visited. If they happened to be men, well, that was all the better in her world. Isabelle and I are grateful to Sherri and The Animal Hospital at Southwood.

Zichronah livracha. May her memory be for a blessing.