Keeping Anxiety at Bay: A sermon for 20B at Christ the King, Valdosta 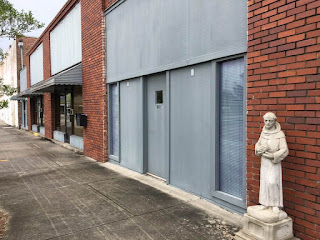 Last Thursday, Christ the King closed on their new building at 110 McKey Street in Valdosta. The location is only a few blocks from where they used to be on E. Central Avenue. It is a big deal for this congregation. Their founder and only rector, Stan White, passed away at the end of December last year during COVID (although he did not die of COVID). It has been a process of grieving, which involved letting go of their old building, and worshipping in a borrowed space from Christ Episcopal Church across from the Valdosta State campus. They also discovered that they have a lot of work to do to tighten up the accounting practices of the parish, much of which has already been started under their interim. So, this unusual parish, known for their mass reception into the Episcopal Church (the whole congregation had been under the Assembly of God Church when the Rev. White took them en masse into the Episcopal Church in the late 1980s) has been through a lot. And they're about to embark on some more steps in their journey.

Before I get into the Scripture we just heard, I want us to take some time with the words from our Collect of the Day…that prayer which basically summarizes all our intentions for this Sunday…

“Grant us, Lord, not to be anxious about earthly things, but to love things heavenly; and even now while we are placed among things passing away to hold fast to those that shall endure; through Jesus Christ our Lord, who lives and reigns with you and the Holy Spirit one God, for ever and ever, Amen.”

These days…I think it’s pretty tough to keep our minds on the heavenly…and not be anxious about the things that are earthly.

We are still living with the pandemic and COVID variants and that has made people more anxious and irritable.

And there are lots and lots of other earthly concerns that pull our minds away from things “heavenly.” Jobs, mortgages, football…(I know that’s another religion, but still…)

I have friends who are sensitive to the seasons and with the Fall Equinox coming…they know that summer is over…we’re heading toward the months when it gets darker earlier in the day…and that affects their mood.

The church has its own earthly anxieties as vestries grapple with what to do about budgets and property. Fortunately, for us, we now have a new building and we are taking the steps toward calling a new rector. That’s an exciting prospect filled with opportunities…that may also cause some anxiety. The way “things always have been” may need to change. The new means sometimes having to let go of some of the old. And so it is a good reminder that we have here in the collect that even as things happening around us may cause us to feel anxious and as though the earth beneath our feet is rolling and rocking like we’re in an earthquake, that’s the time to double-down on our need to look to God…fix our hearts and minds and souls on the Source of Life and Love to keep us from falling apart.

As l look at our readings for today, I can definitely see anxiety written all over the disciples’ reactions in our Gospel.

It’s not surprising, really, that they might be feeling anxious. They are now on their way to Jerusalem, and Jesus has told them, yet again, that there is going to be a clash between him and the ruling authorities…he is going to be killed…and he is going to rise again. They don’t get it. Or maybe they don’t want to believe it. And they have already seen how Jesus dressed down Peter for protesting this prediction about Jesus’ fate and none of them want to be called out in the same way.

Still, the thought of this leader, this Messiah, not understanding that he’s their knight in shiny armor who’s going to burn it all down and save Israel from the iron fist of the Roman Empire is causing them to be anxious.

I mean, if Jesus dies, what happens next? What are they going to do? Who is going to be in charge and take his place? And they start murmuring with each other. Comparing notes on who has the greater status.

Is it Peter, the extrovert who called it correctly that Jesus is the Messiah?

“No way!” say James son of Zebedee and his brother John: he called us the Sons of Thunder, that makes us the greatest.

“You’re all wrong!” chimes in Andrew. “Fisher of people. I’m bringing ‘em in! That makes me the greatest!”

The jockeying for position…the desire to be the most important…the first…that’s all such a product of the human ego. Our fragile egos crave the attention…and that’s what the world has taught us to seek. We all want that blue ribbon, the first place award and all the accolades and recognition and power and prestige.

And if someone else gets rewarded? If someone else is the winner? That’s when our ego starts to become anxious…and quiver and shake and worry: what becomes of me if this other person gets the recognition?

You may have heard the acronym FOMO: Fear of Missing Out. Missing out on the next best thing or being the first to get the latest gadget that is supposed to make us happier. The FOMO phenomenon contributes to our dis-ease and keeps us from living into the present moment.

That is so much of what is going on with disciples as they bicker over this idea of “Who is the greatest.”

Jesus is aware that something is going on with the disciples…kind of in the same way that mom’s have eyes in the back of their head, y’know. And that’s when he, just like a mom, wants to know “What all were you arguing about?” He doesn’t really have to ask because he already knew what was going on.

They still have not understood that he is not a Messiah of Might and Fight but a Prince of Peace and Unconditional Love.

And he knew that, once again, he was going to have to use an illustration to make his point. And so he takes up a child in his arms.

“You see how I am holding this child? How I am welcoming this child? This child who depends upon the kindness of strangers? To align yourselves with the vulnerable and not worry about being the most popular or powerful…that’s what I’m talking about when I talk about greatness.”

This is an important contrast as Jesus and the disciples head on their way to Jerusalem for a confrontation with an anxiety-producing Empire, a system which props up fearful men such as Pontius Pilate to govern using every means necessary to thwart anyone who dares to challenge the status quo.

For Jesus, true power comes in throwing their lot in with the children, widows, those on the margins…the least and the lowest. Welcoming them and serving them and lifting them up is the sign of real greatness.

What a wonderful image and message for us to embrace here at Christ the King!

As we move back into the downtown area into our new place that stands along buildings with ballrooms and the Chamber of Commerce and the Court House…our presence will serve as a reminder that amidst all these earthly powers sits at the heart of the city a sanctuary of compassion and mercy. A house of worship for all comers.

A place where greatness is derived from our service to the people who are looking for kindness and seeking to find some peace.

Our place can serve as an oasis where—as one of our former presiding bishops once said—those seeking Christ can “fast on fear…and feast on faith” (++A. Lichtenberger), a faith which encourages thoughtfulness and stewardship of the gifts we’ve been given.

I hope we’re all excited about where we’re going…even if we may have some lingering fears about the changes it will bring. Because God is still working God’s purpose out as we move into this next phase.

May we have the courage to lay down our own anxieties as we trust in the Spirit’s guidance and welcome this next step in the journey. And let the church say….Amen.

Email ThisBlogThis!Share to TwitterShare to FacebookShare to Pinterest
Labels: Christ the King, sermons