Leggo the Ego: A Sermon for Christ the King, Proper 24 Year B 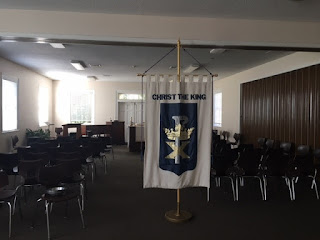 The weirdest thing about my transitional diaconate has been the bouncing back and forth between two parishes in the same city. It's been hard to keep track of who is who, and to keep in mind what is happening in the life of the two places. I have a much better grasp of St. Barnabas, and that's not saying a lot because it seems like every week, I learn some other details that I had not known before. The one thing I do know about Christ the King is that it is a parish moving into new life in so many ways. Working with a small group of parishioners to craft the Prayers of the People has been enormously helpful as has been having a supervising priest who is generous in sharing with me about life inside this parish still recovering from the death of their founder and only pastor.

The Gospel of Mark 10:35-45 is the primary text from which this sermon was born...with a little side of Job 38 with God's answers to Job's lamentable lament.

James and John, the Sons of Thunder. I mean!!

Did you hear what they just said?

Did you hear what these two blessed disciples have asked of Jesus?!

“Teacher, we want you to do for us whatever we ask of you.”

“Hmm…kay…What is it you want me to do for you?”

Here’s the thing: this request comes after Jesus has…one more time…told them what’s about to happen to him.

I know we didn’t read this part of the Gospel today, but I want you to hear what immediately precedes James and John’s burning desire to be on the right and the left of Jesus:

They were on the road, going up to Jerusalem, and Jesus was walking ahead of them; they were amazed, and those who followed were afraid. He took the twelve aside again and began to tell them what was to happen to him, saying, ‘See, we are going up to Jerusalem, and the Son of Man will be handed over to the chief priests and the scribes, and they will condemn him to death; then they will hand him over to the Gentiles; they will mock him, and spit upon him, and flog him, and kill him; and after three days he will rise again.’

OK…so that’s what they just heard. And now they make this request?

“There’s a showdown coming. The bullies are going to give me over to the Empire, and the tyrants of the Empire are going to put me through hell, kill me, and then I will rise again.

And you want to be where?!”

(And for those of us who know how this story goes…we know that the ones who literally will hang on Jesus’ left and right at Calvary are the condemned criminals…the outcasts…the powerless of society).

This is the third time Jesus has told the disciples in Mark’s Gospel what is going to happen when they finally reach Jerusalem.

And still… these two sons of Zebedee don’t seem to be hearing what Jesus is saying. He has been trying to tell them “I’m not the kind of leader who wants political power. I am not going to march you into battle with swords and spears. I’m leading a different type of revolution.”

He’s not into domination. He’s into service to others.

“Whoever wishes to be first must serve all.”

One time when I went to Atlanta with my wife, she was attending a conference of some kind and I was tagging along for the fun of a short holiday…I decided to go visit Ebenezer Baptist Church where the Dr. Martin Luther King, Jr. and his family had served.

It was a weekday mid-morning, so there weren’t other people around. In the sanctuary of the church, they had a recording of Dr. King’s sermon, which he called “the Drum Major Instinct”, playing on repeat.

I took a seat in one of the pews and listened as his voice boomed in the space. Some parts of the recording had shown the wear and tear that happens to reel-to-reel tape and so there were some garbled moments and skips. But it was his voice and his preaching. And the scripture text was this same one we heard this morning from Mark’s Gospel.

King described that the phenomenon at play with James and John is the same Drum Major Instinct…that need to be at the front of the parade…that has plagued all of us forever and a day.

So while we may want to scoff at these sons of Zebedee, if we were really honest with ourselves, we are just as likely to succumb to this need of our ego.

The ego expresses need when we see the advertisement that tells us how our lives will be so much better with this or that product.

Our ego is what drives us to want to be better than somebody else. It’s the ego that leads to the need to dominate other people.

On a much bigger scale…it’s what keeps the nations battling to be the top dog.

It’s all part of that Drum Major Instinct.

But King also pointed out that Jesus didn’t condemn that instinct. Rather Jesus praises that instinct…if it is reordered and redirected toward service.

The mark of true greatness is not about us having the nicest house and living in the best part of town.

the way we feed the hungry…

the way we treat people struggling to make ends meet.

That’s what Jesus wanted James and John to understand.

“Follow me into being a revolutionary for peace and love and justice and your greatness will be seen in the eyes of those who are seeking kindness and equity.”

That is the commandment to love our neighbor as ourselves.

or third time about what it means to be on Jesus’ left and right in glory.

But what if they did understand it?

What if their request is born out of a place of realizing that he’s serious about the confrontation he is about to have with the Empire in Jerusalem?

What if James and John aren’t making their request out of arrogance, but out of fear or need for security?

This is something a commentator raised and I think it’s an interesting thought and so much of it depends on how we read this story.

Again…if we look at what’s in that short section before this exchange with James and John…we read that Jesus and the disciples are “on the road heading to Jerusalem” and Jesus is “walking ahead of them and they were amazed…and those who followed were afraid.” (Mark 10:32b)

If James and John are followers and are afraid, what is that fear?

Are they wanting to flank Jesus, maybe be his loyal protectors against viciousness and cruelty in Jerusalem? Provide Jesus security and in turn secure themselves?

I’ve seen this behavior before.

There are people who feel God is in danger and they must defend God against whatever perceived attack might be happening against the Almighty.

But I hope we have seen in the reading from Job, God is quite capable of handling all complaints and anger and vitriol any one of us might spew at God at any point in time.

I have enough confidence that my Creator is a lot bigger and stronger and infinitely more patient, powerful, and wise than me and as Proverbs says, there’s nothing new under the sun, so God can take care of God’s self.

But fear and that need for security is a big motivator for us. And just like arrogance…it can deceive us into taking actions and making decisions that ultimately keep us from fully living into our baptism to follow Jesus.

Fear of others is what leads to gated communities.

Fear of others is what keeps us from providing public transportation.

Fear is what keeps us in these polarized places of us and them.

Fear is what picks up a gun to settle an argument.

But fear is the opposite of faith. And the one phrase that gets repeated over and over in scripture, in both the Old and New Testaments: “Do. Not. Be. Afraid.”

As Dr. King noted in his sermon…the best part about this type of servanthood is that doesn’t require special training, or extra schooling.

And I will add one does not need to be ordained.

Ordained leaders can be icons that you look to for an example of service. But we are all called by Jesus to serve each other and our community with a heart full of grace and a souls fueled by love.

As we prepare to enter our new church home downtown what does service look like for Christ the King Episcopal Church?

What are the needs we can meet?

Who are the disinherited we can invite in?

How can we live into our Baptismal Covenant as we ‘strive for justice and peace among all people and respect the dignity of every human being?’ (BCP, 305).

May we resist the temptation of arrogance or fear as we seek out and serve those looking for loving-kindness.

And let the church say…