The Politics of Jesus: A Sermon for 22nd Sunday After Pentecost Proper 25 Year B 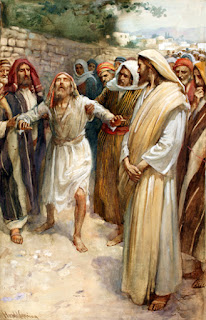 It's a challenge to go back and forth between congregations. It is particularly difficult when I preach three weeks in a row, and one of those weeks is at the other congregation. So if what you read below sounds like a rehash of some of last week's sermon at Christ the King, well...it kind of is!

One of the concerns I have often heard expressed about the church…and especially about preachers…is this fear that we are going to “preach politics.”

I’ve come to understand this as meaning a person doesn’t want to hear about a particular political party, or politician.

I’ve spent too many years around politics and politicians…including in my own family, so I know that politicians are people…and they can be both saints and sinners just like everyone else.

But if we pretend like there isn’t something “political” happening with Jesus and what he is doing as he marches toward Jerusalem…and that the same types tensions he was facing aren’t plaguing us today…then I think we’re fooling ourselves.

The politics of Jesus are about changing and transforming hearts and minds…and a revolutionary movement to get back to God…loving God and neighbor and our selves. Jesus is about love and love stands in opposition to greed and fear and the othering of people. This is a message that should give us hope and encouragement even if it simultaneously makes us uncomfortable when we realize that this isn’t how the rest of the world operates…and how often we don’t live up to the mission of Jesus.

We see that in the story of the rich man. He went running after Jesus, wanting to know what he had to do to inherit eternal life. He learned that he had to let go of his attachment to things. He can’t do it…and neither can we.

We see it from those closest to Jesus. Peter wants a messiah who is going to overthrow the Roman Empire and restore a king of Israel. James and John, the sons of Zebedee, enamored by Jesus demand that Jesus place them one on his right and one on his left in glory. The others disciples are offended by their request…probably because they hadn’t thought of it first. Do they even know and understand that the ones who literally are on his right and left at Calvary will be the lowest of the low in society, the condemned criminals? Doubtful!

Two weeks in a row now we hear Jesus ask:

Last week…this was the question to James and John, which leads to their self-serving desire to be at Jesus’ side in glory.

This week…it’s Bartimaeus, a blind beggar, sitting on the outskirts of Jericho. He can’t see anything…at least he can’t see anything with his eyes…but he has enough of a spiritual vision that he knows that the commotion off in the distance is a crowd gathering around this one, this man who might be the answer to his prayer.

“Jesus, Son of David, have mercy on me!”

This is the ultimate “Help me!” We can imagine that desperation in his voice…the pleading cry of one who depends upon the kindness of strangers. No doubt some of us have seen it in the faces of people we’ve come across in our own lives. Maybe we’ve even been in this position at one time or another. Our backs against the wall and our only answer is to turn to God.

The crowd tries to tell this misfit…this outsider…to shut up. Go away! Leave the leader alone. But he doesn’t quit:

JESUS, SON OF DAVID, HAVE MERCY ON ME!

And then Jesus…stops. Up to now, he has been a man on the move. But now, just as with the hemorrhaging woman who grabbed ahold of the hem of his robe, Jesus stops and tells the crowd to let Bartimaeus come to him. This man’s plaintive cry has reached Jesus’ ears and so he invites this outsider in and asks him the same question he put to his very self-assured insiders James and John:

“My teacher, let me see again.”

My. Teacher. Let me see again.

Bartimaeus gets personal. “My teacher.”

One of society’s forgotten unknowns…already has a clearer sense of who Jesus is than his well-known inner circle of disciples.

Bartimaeus’ profession and request is held in stark contrast to the disciples’ metaphorical blindness and a curious deafness. I mean, Jesus has told his followers at least three times what’s going to happen to him when they get to Jerusalem, how he’s leading a revolution not fought with swords but with love. He has made service to others the cornerstone of his ministry, and yet the disciples are blind to his actions and still hang onto what they think are the symbols of greatness: money and power. They were dumbfounded when Jesus told the rich man to give away everything and follow him.

And let’s look at that rich man for a moment. He wanted what Jesus was offering…but he didn’t want to have to change. He didn’t want to let go of his attachments. And rather than take Jesus up on his instruction to give away his things to the poor and follow, this man turns and walks away.

In contrast…Bartimaeus not only goes toward Jesus…we hear that he threw off his cloak to run to Jesus. In ancient days…beggars needed their cloaks because that’s what they would spread out on the ground to collect the meager offerings tossed in their direction!

Bartimaeus gives up everything and asks to see. And then when he gets his sight…he joins this march to Jerusalem, a long walk toward standing in opposition to all the ways of the Empire, ways that reward with fame and fortune…to strike a new path of power that comes when we show up for one another.

Mark has made great efforts in the weaving together of these various moments to put us in a place of thinking about how we see Jesus and the goal of his mission.

It is a mission that challenges the political and economic forces of his day.

So… if we take the Gospel seriously, it should shake the core of those forces in our time as well.

That’s what I mean when I say Jesus has a political message for us…and it’s one that turns our common understanding of power upside down. If we don’t acknowledge this…then we’re just as blind and deaf as the disciples in Mark.

The way I see it…the culmination of these past many weeks points back to that probing question we heard Jesus ask several weeks ago: “But who do you say that I am?”

That question leads us into a deeper examination of our faith.

Who Jesus is for us?

Who do we say Jesus is in our time? Our place? Our world rife with economic, political, and racial divisions?

“What do we want Jesus to do for us?”

What is the prayer we lift to God to heal our wounds, make peace and seek justice and reconciliation?

O God make speed to save us as we seek your will for our world.

O Lord make haste to help us to be the love and light for those in search of loving kindness.